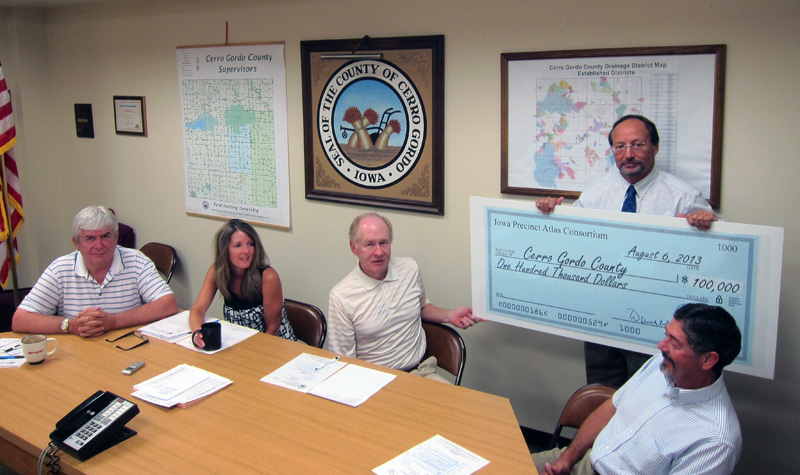 A check for $100,000 to reimburse Cerro Gordo county for expenses related to the award-winning Precint Atlas software was presented to the county from the Iowa Precinct Atlas Consortium (IPAC). The agency’s President, Dennis Parrott, made the trip all the way from Newton, in Jasper county, to present the over-sized check.

The Precinct Atlas software – developed by software engineers who work for Cerro Gordo county along with Auditor Ken Kline, who gave the programmers direction and input – has steadily caught on around the state. At this time, 55 Iowa counties are fully utilizing the software to better administer elections.

Supervisor Bob Amosson explained that the county’s role in developing the software was questionable until IPAC was created to handle distribution of the product.

“Once we saw that this was such a good product and it was gonna go places, I think we was kind of wondering, you know, what’s our role in government here? Is it to take care of the elections in the state of Iowa or run Cerro Gordo county? So my hat’s off to you and your people for saying hey, we’ll gladly do this and reimburse us,” Supervisor Amosson said to Mr. Parrott.

“You guys should be very very proud,” Mr. Parrott told the board.  “You guys have had a major impact on elections in the state of Iowa.”

In other county business, County Engineer Mary Kelly gave a brief road report, a drainage agreement between the Iowa Department of Natural
Resources and Cerro Gordo County was signed pertaining to a drainage district project and a Letter of Support was authorized for the Pyrotechnics Guild International Convention to be held at the North Iowa Events Center in August 2014.