SIOUX CITY – A Sioux City gang member, who possessed a firearm after having been convicted of three previous felonies, was sentenced March 26, 2014, to 70 month’s imprisonment in federal prison.

Ramon Olague, III, age 23, from Sioux City, Iowa, was convicted of possessing a firearm having been convicted of a crime punishable by imprisonment for a term exceeding one year. Federal law prohibits felons from possessing firearms.

According to information presented at Olague’s change of plea and sentencing hearings by the United States, Olague’s firearm possession was discovered on October 17, 2013, when Sioux City Police Officers responded to a domestic disturbance. Officers learned Olague had become angry with his paramour, shoved her, screamed at her, and brandished a gun. He ran off before police arrived, but he was soon apprehended. A search of the area revealed Olague had attempted to hide the firearm at another nearby property.

Olague was sentenced in Sioux City by United States District Court Judge Mark W. Bennett. Olague was sentenced to 70 months’ imprisonment. A special assessment of $100 was imposed. He must also serve a 3-year term of supervised release after the prison term. There is no parole in the federal system.

Olague is being held in the United States Marshal’s custody until he can be transported to a federal prison. 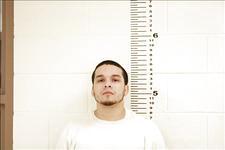