Rep. Linda Upmeyer says there have been “difficulties” and “positive news” in Medicaid privatization 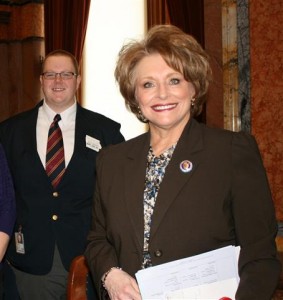 Labor Day weekend has come and gone which brought a much deserved long weekend for many. School is in full swing and fall sports have begun for the year.

A few months back, the state’s Medicaid program transitioned from an antiquated fee-for-service model to a new managed care program.  Medicaid Modernization, initiated by Governor Branstad in 2015, tasks three managed care organizations (MCOs) with coordinating the healthcare of Medicaid enrollees.  The MCOs generally focus their efforts to make patients healthier through wellness initiatives, while the old Medicaid system simply treated illnesses as they came about.

When the Governor first announced this change, we knew that it would be a challenge.  But we took the opportunity that was given to us by this transition and implemented some of the nation’s toughest and most robust Medicaid oversight ever seen.  This unprecedented level of oversight will allow us to monitor the effectiveness of the Medicaid program, and hold our MCOs accountable.  If the MCOs don’t meet their contractual obligations, they will be penalized financially for failure to meet those standards, and ultimately affect their future in our state.

Last month, the legislature’s Health Policy Oversight Committee met to receive the first report since the transition to Medicaid Modernization.  This bipartisan group of legislators from both chambers is tasked with reviewing quarterly reports and overseeing the change.

The first quarterly report contains an enormous amount of data and provides an in-depth level of detail on the Medicaid program.  It’s more information than I have ever seen regarding the Medicaid program, and will give us great insight on our Medicaid population to measure treatment outcomes and ensure that patients are receiving the care and services that they need.  The data will also allow us to make sure that providers are being paid properly for covered services.

While we have seen some difficulties with this transition, the report also shows some very positive news during the first three months of Medicaid Modernization:

As we continue with this new approach to Medicaid, the Health Policy Oversight Committee will be keeping a close eye on the MCOs to ensure that patients are receiving the services they need and providers are being paid for those services.  We understand that this transition has not been easy for everyone.  Transitions are difficult, there’s no question about it.  What’s important is that we work together to make sure that this change goes as smoothly as possible.

House Republicans are listening to the concerns from Iowans regarding this shift.  We’ve heard from both patients as well as providers about the various roadblocks and challenges that they’ve encountered so far.  We’ve heard about denials for reimbursements as well as delays in prior-authorizations.  Those concerns are not falling on deaf ears and House Republicans remain committed to resolving these issues.