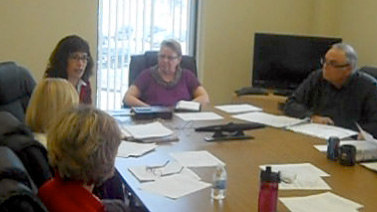 The source indicated that Bookmeyer’s moves, if true, would be a violation of the Iowa Civil Rights Statute.

The contract Townsend presented to the Mason City Human Rights Commission is not open for negotiation, Townsend said last week when she presented the agreement to the Mason City HRC.  Further, the contract only stipulates that the MCHRC may send cases to Des Moines if chooses to, but is not bound to do so; the MCHRC may still operate as it always has, provided it has the funding to do so.  See the video at the bottom of this story for much more on that meeting.

There have been no “negotiations” between the ICRC and the Mason City Human Rights Commission, or the City of Mason City and its officials. I have offered the MCHRC the opportunity to enter into a workshare agreement that they can chose to sign or not, depending on how the Commission decides to handle their remaining cases. The Mason City city attorney contacted me this week with a couple of questions regarding the workshare agreement and asked that two minor changes be made to the agreement for clarification purposes, which I agreed to. However, neither of the two changes, changed the terms of the agreement in any way and the terms offered in the original agreement remained exactly the same. Indeed, the city attorney did not inquire about “negotiating” any of the terms of the agreement and did not ask for any changes other than two grammatical changes.

Just for clarification, there is nothing within the ICRA that would prevent the local agency and/or city government from “negotiating” the terms of a workshare agreement with the ICRC. As a general rule, no negotiations are conducted because of the need to provide uniformity throughout the state for all local agencies that chose to enter into the workshare agreements with the ICRC, but I do take suggestions from agencies regarding the structure of the agreements. To date, MCHRC has not entered into a workshare agreement this year, however with the vote to reduce the funding for the commission, I offered the MCHRC the opportunity to enter into an agreement for the remainder of this fiscal year in an effort to assist them through their unique circumstances. The workshare agreement does not require the agency to refer cases to the ICRC, it simply establishes the terms under which the local commission will be reimbursed by the ICRC should they elect to do so.

With regard to what parties will need to sign the agreement, I have advised both the City Attorney and the acting chair of the MSCHR, that this will depend on the Mason City ordinances. There is nothing within the ICRA which requires the signature of any particular body. Rather the agreement must be signed by the appropriate authority depending on the governing city ordinance establishing the human rights commission. Some city ordinances within the state require City Council/Mayoral approval, others do not. I am not an expert in Mason City ordinances and have no opinion regarding the appropriate authority to sign the agreement. I would refer you to the Mason City city attorney for any questions regarding this issue.

I do not have a position on whether the MCHRC should enter into the agreement (although I can see no reason why they wouldn’t) or any of the issues currently facing the Commission and City of Mason City. I am here to answer questions posed by the citizens of Mason City, MCHRC commission members and members of city government, as I would for any other local community in the state of Iowa with similar issues or questions and to provide an option to the MCHRC for processing their remaining complaints. Should you have any other questions, please do not hesitate to contact me as I know there is a lot of misinformation floating around and I would rather provide the correct answers to questions individuals may have.

I concur with Director Townsend.

To answer your questions more specifically from my perspective:

It has come to my attention that Mayor Bookmeyer has entered into the negotiating process with the Iowa Civil Rights Commission’s negotiations with the Mason City Human Rights Commission and the possible agreement that might be signed between the two agencies.

– I have not and have no intention to enter into any negotiating process regarding the agreement.

I am told Mr. Bookmeyer has used Mason City attorneys in this process and will insist that the Mason City Council and himself approve the agreement.

– After attending the April 3rd MCHRC meeting it became apparent that the work-share agreement being offered to the MCHRC had a signatory line for the mayor. As a courtesy to the MCHRC, I referred the work-share agreement to the city attorney for him to consider the agreement for recommendation to council and determine whether it needed council and mayoral approval. He has now signed off on the agreement and confirmed that it is a 28E agreement that would need council approval before mayoral signature, via Section 28E.4, pending MCHRC approval.

I am further told that the Mason City HR Commission is being left out of the process entirely.

Thank you for (copying) me on this important subject. So that everyone’s has all of the history on ICRC work sharing agreements, the Mason City Commission has had such agreements with the ICRC for at least a decade, and until Beth arrived, there has never been a requirement for past Mayors or City Councils to lend their permission.  In fact, the Commission has all the authority it needs under Chapter 216.19 to execute the agreement on its own behalf.