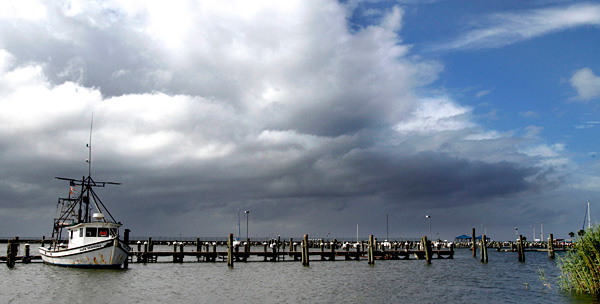 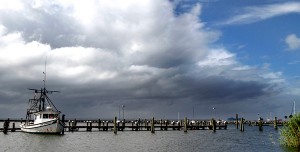 (PHOTO: Feeder bands from Hurricane Isaac move across the horizon in Pass Christian, Mississippi, as the stoorm draws close, on Tuesday, August 28, 2012.)

Isaac made landfall as a Category 1 hurricane about 10 miles west of the mouth of the mighty Mississippi River and 90 miles southeast of New Orleans in Plaquemines Parish, La., packing winds in excess of 80 mph. The center of the hurricane was expected to skirt a wide stretch of Gulf of Mexico coastline, bringing havoc with it as it strengthened upon hitting shore.

Interviewed on The Weather Channel shortly after Isaac came ashore, Plaquemines Parish President Billy Nungesser said the storm surge had unexpectedly pushed up the Mississippi River, which has been at historical lows because of this summer’s punishing drought. Water was splashing over the tops of the river’s levees, causing concern.

“We’re concerned if this keeps up it will push up the river and bring the river over its banks,” Nungesser said, noting his parish sticks out like a finger into the Gulf of Mexico.

However, U.S. Army Corps of Engineers spokesman Ken Holder told The Weather Channel that tidewaters were receding and no breach of levees was expected.

“This storm is packing a hell of a punch,” said a worried Nungesser.

Power was out across parts of Louisiana, Mississippi and Alabama Tuesday night, with power company Entergy reporting more than 150,000 without power in the New Orleans area alone.

Reports of water over the Mississippi River levees was especially troubling as it came on the eve of the seventh anniversary of the day that Hurricane Katrina’s second landfall devastated New Orleans on Aug. 29, 2005, and left more than 1,800 people dead in the city and along the Gulf Coast.

Worried about flooding and with Japan’s tsunami fresh in mind, the Nuclear Regulatory Commission said the Waterford 3 nuclear power plant in Killona, west of New Orleans, was shut down as a precaution.

Isaac became a Category 1 hurricane shortly after noon EDT, with winds in excess of 75 mph, and never lost steam.

“Hurricane Isaac is forecast to move inland as a Category 1 hurricane near the mouth of the Mississippi River late tonight,” the National Weather Service said in an update from Shreveport, La. “A flash flood threat is expected along with tropical storm force winds Wednesday through early Thursday morning.”

Isaac’s roughly 800-mile width meant it was expected to deliver a quadruple blow of storm surge, wind, rain and tornadoes over a large swath of the central United States. By Tuesday afternoon, the storm’s outer bands began coming ashore.

“We’re dealing with a big storm, and there could be significant flooding and other damage across a large area,” President Barack Obama said Tuesday morning after receiving a briefing from Homeland Security Secretary Janet Napolitano and other federal officials. “Now is not the time to tempt fate. Now is not the time to dismiss official warnings. You need to take this seriously.”

Obama had issued a disaster declaration for the states of Louisiana and Mississippi, and Isaac will be the first large test of efforts to strengthen the levee system in the New Orleans area since Katrina swamped the hapless preparations in 2005.

Government response teams have fanned out across the Gulf Coast ahead of Isaac’s arrival, said Craig Fugate, the chief of the Federal Emergency Management Agency.

“We’re really just urging people to heed any emergency measures,” he said from Alabama during an afternoon conference call. He urged residents to stay inside and off the roads, “so response teams don’t have to go and fetch you.”

By late Tuesday, shrimpers and fishermen along the coast either had moved their vessels up the Mississippi River to safer points of refuge or had simply abandoned them to the fates. In the Mississippi Sound, in Pass Christian, Miss., Mayor Chip McDermott struggled to tie off a 60-foot shrimp boat that its owner had left in the harbor. Water crept toward the sea wall before noon. A huge trash bin bobbed inside the harbor.

McDermott expected 10 feet to 12 feet of storm surge in Pass Christian, where 70 percent of residents live in flood zones.

“We’re fixing to have water,” McDermott said. “Ain’t no way around this.”

Coastal residents gathered supplies in an orderly fashion Tuesday and did what they needed to do to get ready for Isaac.

“When you live through storms,” said Mark Kirsch, a former Coast Guard meteorologist who lives on the Mississippi coast, “it brings your level of preparedness up. . . . We know what they can do.”

“It’s not a point on the map; it’s a huge storm,” Knapp said from Miami in a conference call, discouraging too much attention on where the storm’s center hits land.

Much of Louisiana, Mississippi and Alabama will be soaked, he predicted.

“I don’t want folks to take this lightly just because it’s not a major hurricane,” he said, noting that the categories of storms measure wind speeds and that Isaac’s threat comes from its size and its slow movement, at 10 mph. “That category does not capture the fact that this is a large system and a slow-moving one. . . . The large size plus the slow motion, it means near the coast and well inland the rainfall and flooding could be a serious issue.”

Mississippi was hard-hit by Katrina, and residents along its coastline braced Tuesday for the worst from Isaac.

In Harrison County, home to the resort cities of Biloxi and Gulfport, a curfew was imposed from 7 p.m. Tuesday until 7 a.m. Wednesday.

“We don’t want to deal with traffic while we’re dealing with other issues,” Sheriff Melvin Brisolara said, predicting many impassable roads. The curfew, he said, “is mainly for public safety issues.”

Coastal Mississippi felt the effects of Isaac at high tide Tuesday morning. There was seawater on U.S. 90, a four-lane highway that runs along the beach area. The highway was ordered closed by nightfall.

“This is not rainwater we’re looking at,” said Rupert Lacy, the county’s emergency manager. “This is water coming off the Gulf. That’s a little alarming.”

Residents in low-lying coastal areas were put under mandatory evacuation around midday, and the county opened four shelters, each capable of housing more than 200 people, with plans to open two more late Tuesday.

By midday Tuesday Isaac’s presence was felt in the New Orleans area, too.

“We just got the first rain bands . . . COLD rain,” Lisa Yanes, a resident of Harvey, La., a community just southwest of New Orleans, wrote in a Facebook message to McClatchy.

Bars were open at least half of Tuesday, Yanes said of an area that’s best-known for its alcohol-fueled fun. By late afternoon, power was out in Harvey and much of the New Orleans area. The local newspaper, The Times-Picayune, reported that flooding already had closed portions of U.S. 90 in east New Orleans and residents were scrambling for alternative routes westward.

Residents of unincorporated Harvey, near the Intracoastal Waterway, weren’t forced to evacuate. But less than 10 miles away, residents were ordered to leave Belle Chasse, part of Plaquemines Parish, hard hit by Katrina.

“You need to stay home. If you’re bored, don’t get in your truck and drive the neighborhoods. Play Parcheesi; do something else, but don’t go out on the streets,” he said during a news conference late Monday.

The Port of New Orleans was closed Tuesday, as was the Port of Mobile in Alabama. Barge traffic along the Mississippi River was halted from Baton Rouge, La., south to the mouth of the mighty river.

“Any movement on the waterways is only by permission of the captain of the port; everything is shut down,” said Petty Officer 2nd Class Elizabeth Bordelon, a Coast Guard spokeswoman in New Orleans whose office looks out at the river. “It’s strange to see no traffic. The streets are pretty quiet here.”

While Gulf Coast residents will feel Isaac’s wrath, much of the East Coast is likely to feel the storm in the wallet. Almost 94 percent of oil production in the waters of the Gulf of Mexico was shut in by Isaac, the Energy Department said Tuesday afternoon. Gasoline refineries in the New Orleans area, with a capacity to refine 3 million barrels a day, ramped down production.

If there’s significant flooding or wind damage, it could crimp gasoline production and gasoline shipments via pipeline to hub cities such as Atlanta, which serve the Eastern Seaboard. Isaac could raise gasoline prices above $4 a gallon temporarily on parts of the East Coast.

Gasoline prices leapt to a nationwide average of $3.756 a gallon Tuesday, the highest since early May, on concerns about supply disruptions.

White House press secretary Jay Carney said that “all options remain on the table” when he was asked about releasing oil from the Strategic Petroleum Reserve if gasoline prices stay high after Isaac’s romp.