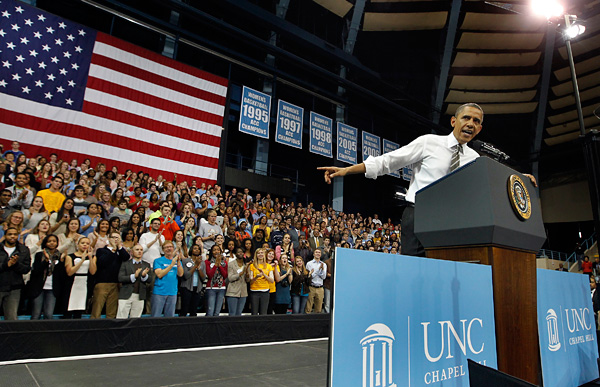 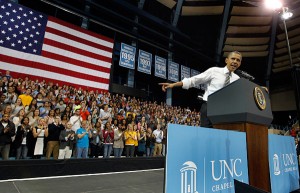 CHAPEL HILL, N.C. — In his first stop on a two-day college tour, President Barack Obama tried to reassure the seniors venturing into a fragile job market that the American dream is still realistic.

(PHOTO: President Barack Obama gestures as he delivers a speech at the University of North Carolina in Chapel Hill, North Carolina, Tuesday, April 24, 2012.)

“You’ve spent your years here while the whole world has been trying to recover but it’s not yet fully recovered from the worst economic crisis since the Great Depression,” he said Tuesday, standing in front of a giant American flag buttressed by Carolina blue basketball championship banners. “The degree you earn from UNC will be the best tool you have to achieve the basic American promise. …The American Dream is within your reach.”

The president acknowledged the economy is not as robust as he would like but suggested he inherited the problem. “Too many folks in the middle class are searching for that security that started slipping away before the recession,” he said.

The president appeared at ease in his speech before a standing-room-only crowd — estimated at 8,000 — in Carmichael Arena on the campus of the University of North Carolina-Chapel Hill. He started with a few easy applause lines, saying he had picked the Tar Heels to win the NCAA basketball tournament.

Dubbed an official White House visit, Obama didn’t avoid taking a jab at Republican challenger Mitt Romney as he talked about his own humble beginnings and student loan debt. Obama said he and his wife just finished paying off their own student loans about eight years ago. “I didn’t just read about this,” he said.

The UNC event launched a tour of three university campuses in three states — North Carolina, Colorado and Iowa — to urge Congress to prevent interest rates on many student loans from doubling this summer. If Congress does not act, the rates will rise from 3.4 percent to 6.8 percent July 1 for an estimated 7.4 million U.S. undergraduates who have federal loans.

In North Carolina, the higher interest rate would affect 160,000 students, adding $980 over the life of the average student loan, according to the White House.

The appearance also served to energize students ahead of the May 8 primary when a constitutional amendment banning gay marriage and civil unions appears on the ballot. “It will remind people to vote,” said Lila Fleishman, a 19-year-old freshman from Durham, N.C.

At the same time, students like Bridget Walsh acknowledged her friends aren’t as excited about Obama four years after he captivated young audiences and rode the youth vote to the White House.

“Since 2008, I think you can really say a lot of it’s fizzled,” said Walsh, an 18-year-old freshman from Cincinnati.

Republicans welcomed Obama to North Carolina but questioned why he is campaigning on the taxpayer’s dime. “The country is in trouble economically,” said Robin Hayes, a former congressman and Republican state party chairman in a teleconference Tuesday morning. “The truth is that one of two students is not going to get jobs when they graduate.”