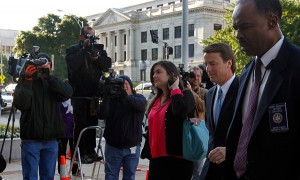 GREENSBORO, N.C. — Two portraits of John Edwards emerged in opening arguments at the trial of the disgraced politician, who is accused of breaking campaign finance laws by accepting more than $900,000 in illegal contributions to help conceal an extramarital affair during his 2008 bid for president.

The prosecution on Monday portrayed Edwards as a liar and a deceiver who went to great lengths to cover up his affair in order to protect his campaign image as a family man. The defense portrayed him as a man who committed a sin — a sin Edwards acknowledges — but did not break the law.

The former senator from North Carolina has pleaded not guilty to six criminal counts related to campaign finance violations. He was joined in the courtroom Monday by his parents and his daughter Cate.

Prosecutors contend that bills paid by two Edwards benefactors were unreported campaign contributions designed to cover up Edwards’ affair with campaign videographer Rielle Hunter, which went on even as Edwards’ wife was battling cancer.

Hunter gave birth to Edwards’ daughter in February 2008, but the affair was not widely publicized until later that year. Edwards did not acknowledge paternity of the child until 2010. Elizabeth Edwards died later that year.

“Humiliation” is the word Allison Van Laningham, one of Edwards’ attorneys, scrawled on a courtroom blackboard as she argued that Edwards had attempted to avoid humiliating himself and his family with public disclosure of his infidelity. What Edwards did “may be a sin, but it is not a federal election crime,” Van Laningham told the jury of seven women and nine men.

“Follow the money,” she said, suggesting that former Edwards campaign aide Andrew Young, the prosecution’s star witness, is trying to profit off Edwards’ troubles. The defense contends the contributions from Edwards’ benefactors helped Young — who at one point falsely claimed he was the father of Hunter’s child to protect his boss — support a lavish lifestyle, including a $1.5 million mansion in Chapel Hill.

Young is the author of a tell-all book, “The Politician,” which Van Laningham said he is trying to parlay into a movie.

Prosecutor David V. Harbach II told the jury that they “will not like” Young, but that he is nonetheless a believable witness.

While the defense has argued that the money from Edwards’ benefactors should be considered gifts rather than campaign contributions, the prosecution says it was campaign money intended to protect Edwards’ presidential ambitions.

Edwards “made a choice to break the law” because “if the affair went public, it could destroy any chance he had to be president, and he knew it,” Harbach said.

“Too much ambition can be dangerous,” he said.