Kofron was arrested in March 2011 after Hancock County Sheriff’s Department applied for a warrant for his arrest following the completion of an investigation of an alleged sexual abuse incident from November 2010.

Court records show Kofron had pled not guilty and a scheduled trial for February 2012 came and went before a guilty plea was entered in the case on March 13th.

At Tuesday’s scheduled plea change hearing Hancock County Attorney Karen Salic motioned to court to reduce the original 3rd degree sexual abuse charge to a lesser count of assault with intent to commit sexual abuse. Presiding Judge Colleen Weiland approved the motion before sentencing Darin Kafron to a one year suspended jail sentence. Judge Weiland did impose 14 days of the sentence, but it is unclear rather she granted Kafron credit for time served from the short time he spend in jail before posting bond following his arrest.

In addition to the suspended sentence Kafron must complete 2 years of probation with the Iowa Department of Corrections, and pay a $625 fine, $218.75 surcharge, and $140 in court costs.

Judge Weiland also extended a protective no contact order for one year before dismissing a contempt of court charge for Kafron’s alleged violation of that order in June of 2011. 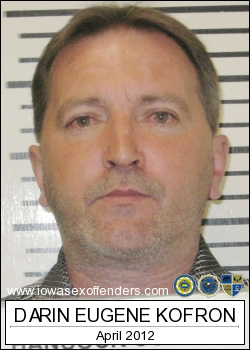