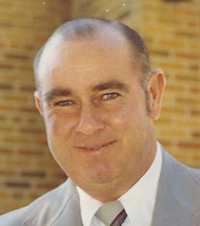 Funeral services will be held at 10:30 am, Monday, April 16, 2012 at the Sacred Heart Catholic Church, 305 Elm St., Rockwell, Iowa.  Officiating will be Msgr. John Hemann.  Visitation will be from 4 until 7:00 pm Sunday April 15, 2012 at the Sacred Heart Parish Center, with a wake service at 4:00 pm.  Internment will be in Pleasant Valley Cemetery, Swaledale, Iowa.  Those planning an expression of sympathy may wish to consider memorials to the Swaledale Fire Department.  Condolences may be shared with the family on the funeral home website at www.Fullertonfh.com

John Dick was born to John and Dorothy (Gibson) Gaffney on February 12, 1931 in Mason City, Iowa.  He was a graduate of Swaledale High School.  He began working for John Jinrich’s implement dealership and later started his carpentry career with Harvey Polsdofer.  After a few years, he began his own carpentry business where he worked for the next fifty plus years.  John Dick joined the Swaledale Fire department in the early 50’s and became chief in the early 60’s.  He retired as chief in 1995 and continued his support of the fire department as an honorary member.  On January 29, 1951 he was united in marriage to Lucille Priebe.  John Dick built their home in Swaledale where they raised their two sons.  They were happily married for 60 years until Lucille’s passing last year.

Over the years, he enjoyed hunting, playing pool, and golfing with his buddies. He also loved watching sports and playing cards weekly with the guys.  He had a special love for animals especially his cat Sophie.  John Dick was admired and respected by those whose lives he touched.

John Dick was preceded in death by his parents, brother Robert, and wife Lucille.

A Mass of Christian Burial will be held 10:30 am, Tuesday, April 17, 2012 at Saint Joseph Catholic Church, 302 5th St. S.E., Mason City, with Father Craig Steimel Officiating. Visitation will be 4-8 pm with a Parish Wake at 6 pm on Monday at Fullerton Funeral Home, 123 2nd St. S.E., Mason City. Following the funeral Monica will be cremated. A private inurnment will be held at a later date. Condolences may be shared with the family at www.Fullertonfh.com.