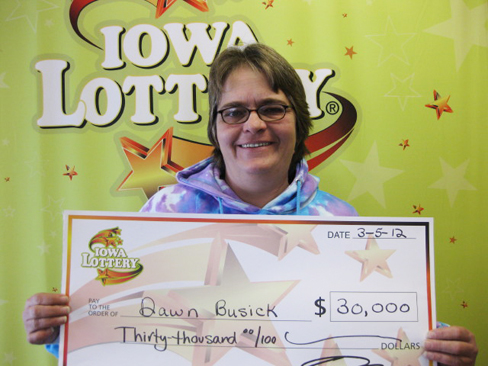 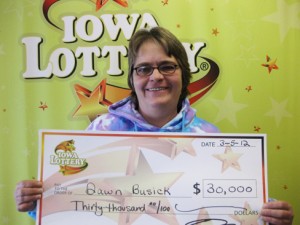 DES MOINES, Iowa – A Mason City woman said she had to go over her “Match & Win” ticket for nearly an hour before she believed she’d won a top prize of $30,000.

Dawn Busick, 48, said she asked all of her family members to help her check the ticket before reality sunk in.

“It was really something,” Busick said. “I didn’t get any sleep at all.”

Busick said she thought about taking her ticket back to Northside Liquor & Grocery, 1303 N. Federal Ave. in Mason City, but she was too afraid something would happen to the ticket.

“I decided I’d just wait until Monday,” Busick said as she claimed her prize at the Iowa Lottery’s regional office in Mason City.

Even more unbelievable was the fact that Busick had never played Match & Win™ before.

“We both play sometimes and pick different ones,” she said. “I had never played that game before and it was just one we picked.”

Busick said she told her family about her big news, and they’re all very excited for her. She said she plans to use some of her winnings pay bills.

Match & Win™ is a $3 scratch game. Players uncover “your numbers” and “bonus numbers” areas and any matching number in the “rows” and “columns” area. If they match all the numbers in any row or column, they win the corresponding prize for that row or column. The overall odds for winning a prize in the game are 1 in 3.64.