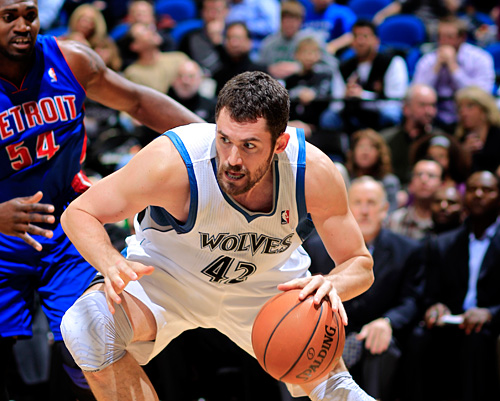 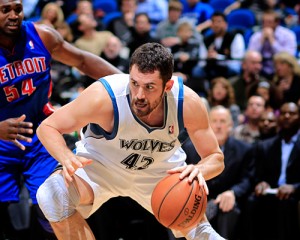 MINNEAPOLIS — It was a curious night at the Target Center on Wednesday night.

Somehow, the low-scoring Pistons ran to a 16-point lead over the Timberwolves with only 3:55 left in the first half . And somehow they did it with limited contributions from their best player, Greg Monroe, who was saddled with foul trouble.

(PHOTO: The Minnesota Timberwolves’ Kevin Love (42) dribbles in the second quarter against the Detroit Pistons at the Target Center in Minneapolis, Minnesota, on Wednesday, January 18, 2012. Minnesota topped Detroit, 93-85.)

But the curious part was that the big lead actually was a negative for the Pistons: The Timberwolves were playing so badly that the Pistons should have been leading by more.

So it wasn’t surprising when the suddenly relevant Timberwolves narrowed the deficit to six by halftime and ultimately overran the Pistons, 93-85.

The Pistons fell to 3-12, and the Timberwolves (6-8) clinched their third victory in four games.

Some will focus on the Pistons’ second half, when they allowed 57 points after holding the explosive Timberwolves to 36 points in the first half.

But it was a first half in which the Timberwolves weren’t playing well. The Pistons took advantage to a certain extent, but they probably should have led by more than 16 points after Tayshaun Prince’s 21-footer gave them a 40-24 lead with 3:55 left in the half.

“That’s the game of basketball,” coach Lawrence Frank said. “Coulda, shoulda, but we weren’t, so I would say this. Could we have been? Of course, but to begin the third quarter (we) came out ready. We got the lead back up, but especially if you’re playing with a lead, you got to make sure you’re defending.”

But if the Pistons didn’t shoot 4-for-10 from the free-throw line (on their way to a 10-for-21 night), they might have had a bigger lead. Also, it seemed the Pistons got what they wanted on offense in the first half, and while they were riding a red-hot Prince (29 points), they missed other opportunities either with a flubbed pass or missed easy shot.

So when Ricky Rubio, Luke Ridnour and Jose Barea started breaking down the Pistons’ defense in the second half (energized by a loud Target Center crowd), it seemed to be only a matter of time before the Timberwolves ran the Pistons down.

And they won it in the fourth, outscoring the Pistons, 29-14.

“It’s the same story,” said Greg Monroe, who had 13 points and 12 rebounds before fouling out. “We have to find a way to win it down the stretch, and that’s it.

“We can’t keep playing well for 42 minutes and in the last 6 minutes you give the game away.”