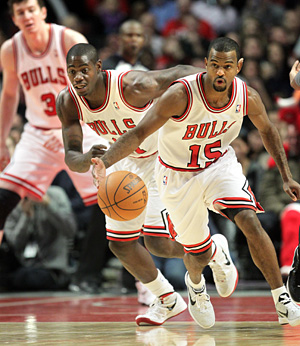 CHICAGO — C.J. Watson has wanted no part of the running joke, even in light-hearted private moments.

But after scoring 23 points Tuesday night in the Bulls’ 118-97 victory over the Suns at United Center, the silliness only will gain steam.

(PHOTO: Chicago Bulls point guard John Lucas (15) starts a fast break in the second half against the Phoenix Suns at the United Center in Chicago, Illinois, on Tuesday, January 17, 2012.)

The three times Watson has played for an injured Derrick Rose, Watson has averaged 24.3 points. Throw in John Lucas III’s 25-point performance when Rose and Watson both were injured last week and who needs that No. 1 guy anyway?

“We do,” Watson said, not taking the bait.

The point is: The Bulls improved to 6-0 at home with an impressive offensive showing that featured 31 points from a red-hot Carlos Boozer, 13 points and 12 rebounds from an active Joakim Noah and 11 points and six assists from Richard Hamilton.

The Bulls posted season highs for points in a quarter (39 in the first), half (67) and game. Noah even sank two of his patented “Tornado” jumpers en route to his third double-double and second in four games.

“I think we’re the deepest team in the league,” Boozer said.

Hamilton returned unexpectedly from his sore groin, which had sidelined him for 10 of the previous 11 games. Immediately, Hamilton helped the Bulls’ transition game, running the wing, distributing the ball, teaming with Watson seamlessly.

“He runs the floor really hard,” coach Tom Thibodeau said. “The thing about Rip is he knows how to find shots. He has a great instinct to find the open area. He moves great without the ball. It gives you a great rhythm.”

“It felt great to be out there,” Hamilton said. “I didn’t even practice and today was the first day I really ran on it. My teammates really helped me and the coaches helped pace me with my teammates. We made a lot of easy plays for each other.

Boozer posted 26 points by halftime on a dizzying array of jumpers. That included eight points during a 12-0, second-quarter run that broke open the game. He didn’t play the entire fourth quarter — and this time it was because of efficiency.

“I was just playing off my teammates,” Boozer said.

And Watson was Watson, playing the first 17 minutes, 46 seconds, hitting his first seven shots en route to 20 points without a miss and committing zero turnovers in 33 minutes. Watson also had five assists as the Bulls posted 31 to just six turnovers.

The Suns did establish an opponent season-high for points. However, given that the previous one stood at 74 and the Bulls had allowed a suffocating average of just 66.8 points through the first five home games, such is life.

“I loved the way the ball hopped,” Thibodeau said. “It wasn’t sticking anywhere.”