Heat moves to 4-0 in Wade-less games 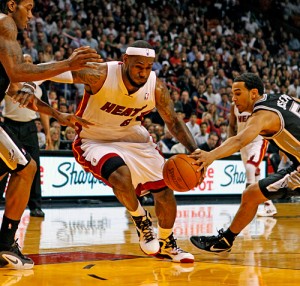 It wasn’t enough, apparently, for Wade to spend Sunday night partying with famous friends like Usher and Common.

It wasn’t enough to get that unexpected weekend visit from his 91-year-old grandmother, Willie Mae Morris, who flew in from Chicago for the big occasion.

Wade, still nursing that badly sprained right ankle, reported to his workplace Tuesday night and enjoyed a command performance by his Heat teammates.

You might even call it a surprise party of sorts.

After spending the first half hiding behind the figurative couch, the Heat jumped out with a scary-good third quarter and nearly sent the Spurs into cardiac arrest.

At the very least, this 120-98 runaway should go a long way toward extending Wade’s rest period after a rough-and-tumble start to this shortened season.

No timetable for Wade’s return?

“Obviously, we want to be full strength and have our guys in our rotation,” Heat coach Erik Spoelstra said earlier Tuesday. “I don’t think that’s realistic for many teams right now, so you look for the silver linings.

You mean like those six three-pointers Mike Miller pumped in for his season debut?

Or that 4:1 assist/turnover ratio for Mario Chalmers as he played without Wade next to him for the fourth time this season?

Everybody knows the Heat absolutely must have a healthy Wade if they want to get back to the NBA Finals.

He means too much at both ends of the floor.

“Everybody understands his impact,” Spoelstra said. “Guys understand we’ll be losing a big part of our offense, but also his activity defensively. He’s been making lot of plays for us — the blocks, the deflections, the steals.”

With Wade sporting a three-piece suit instead of swooping in to clean up his teammates’ mistakes, the Heat gave up 30 first-half points in the paint.

“He’s so active on the back line of our defense when he’s there protecting the rim,” Spoelstra said.

That’s why there should be absolutely no rush to get Wade back in the lineup. Not after what he did to his right ankle last Friday at Denver.

Not after previous scares involving his left foot and, as it turns out, his right calf.

That’s three different body parts in barely three weeks’ worth of games. At this rate, Wade would have been in traction by Valentine’s Day.

So the Lakers are coming to town on Thursday?

No doubt, Wade would hate missing a chance to match up with Kobe Bryant, especially after an NBA-sponsored poll of league general managers gave Kobe the nod as the game’s top shooting guard.

By a landslide over Wade.

That showdown can wait until the rematch on March 4, if not the middle of June.

The Heat can’t lose sight of the big picture less than a fifth of the way through this truncated regular season.

Don’t worry. Spoelstra isn’t about to take any shortcuts when it comes to the charter member of the Big Three.

That’s another of the many benefits of Spo getting that contract extension before the year began.

His mission remains a championship, and no mini-slump in the middle of the January is going to distract him from that aim.

Even if it means playing without Superman for a few more games.

What is it about teams finding a way to fill such a massive void and holding things together?

Those traits certainly kicked in after the break against the Spurs.

So take your time, D-Wade.