This news story was published on January 14, 2012.
Advertise on NIT • Subscribe to NIT 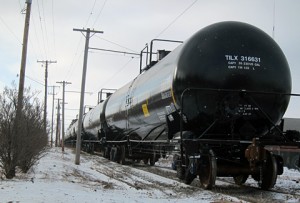 MASON CITY – A large number of black rail cars in Mason City on 19th Street have residents asking why they are there.

The rail cars extend from Cold Storage on 15th Street SE all the way past Federal Avenue up to the Sears department store along 19th Street SW.

The rail cars do not block any intersections. They are all black, and look brand new or relatively new.

“We are just storing them for awhile,” Kay, an employee of Iowa Traction Railroad Company in Mason City, said on Friday.

Kay said the rail cars will be there for “a couple of months. It’s not permanent.”

The rail cars will not be moving, Kay said, and will eventually stretch all the way to Pierce Avenue.

Businesses along the railroad route have been notified that the rail cars will be there, Kay said. “We tried not to block any businesses or people’s view.”