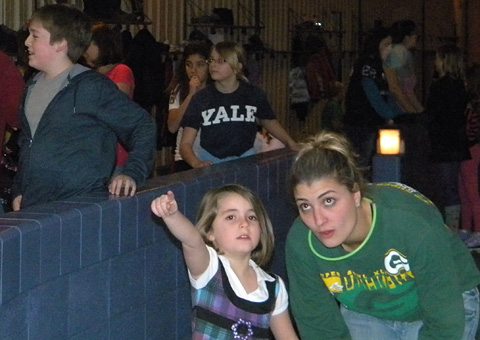 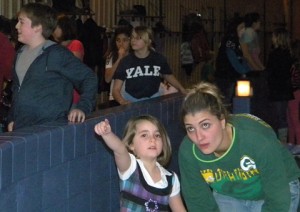 Story by Kelly Elbert and Photos by Jody Spear

Friends of Mason City Dog Park and Roller City teamed up Friday night for a “Fantastic Friday” of roller skating fun to raise funds in order make their dream dog park a reality.

Hundreds of local roller skating enthusists, including volunteer skate guards from the “Dames of Anarchy” turned up to “lend a paw,” resulting in over seven hundred dollars being raised for the canine retreat.

Hunt jump started Fridays event by visiting Roller City’s website.  There she learned about “Fantastic Fridays” in which Roller City devotes every second Friday of the month to nonprofit fundraising.

The organization spawned from a 2009 Doggie Mixer held in East Park and grew from there.  Since then, Friends Of Mason City Dog Park has been advocating for a fenced in dog park where dogs and their owners can enjoy an environment where canines can exercise without disruption or endangerment to citizens.

Mason City resident Tanner Poulter turned out to partake in some of the fun. “I’ve supported this cause for awhile,” he said.  Poulter, who has three dogs, said “I believe the city would benefit from an off-leash dog park.”

The park’s proposed location is north of the Mason City Water Treatment Plant on 12th street NE and Elm Drive.

The five acres will be restored  to accommodate dogs and their owners. Complete with fencing, sanitation stations, drinking fountains and a daily fee station, plus benches and rules and regulations signs.

Friends of Mason City Dog Park says, “They are continuing to make strides towards their goal.  The next fund raiser is already set in motion.  For those who want to show their support, Buffalo Wild Wings is donating 10% of all pre-taxed food sales from any guests who presents a fundraising ticket on Wednesday, January 18th from 11:00 am to 1:00 am.”