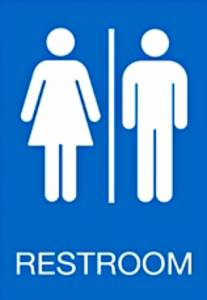 WASHINGTON, D.C. – President Donald Trump has eradicated guidelines previously set by the Obama Administration that allowed transgender students to use bathrooms of the gender the identify with, rather than be required to use a bathroom of the sex they were assigned at birth.

Under the Obama guidelines sent to schools, as a condition of receiving Federal funds and to comply with Title IX law, schools were made to agree that they will not exclude, separate, deny benefits to, or otherwise treat differently on the basis of sex any person in its educational programs or activities unless expressly authorized to do so under Title IX or its implementing regulations.  A school must not treat a transgender student differently from the way it treats other students of the same gender identity.

This week, siding with state’s rights, President Trump revoked this order, which was approved by a judge last year. Press Secretary Sean Spicer said Wednesday that “the President has made it clear throughout the campaign that he is a firm believer in states’ rights and that certain issues like this are not best dealt with at the federal level.”

Education Secretary Betsy DeVos echoed Spicer’s words, saying “This is an issue best solved at the state and local level. Schools, communities and families can find — and in many cases have found — solutions that protect all students. We owe all students a commitment to ensure they have access to a learning environment that is free of discrimination, bullying and harassment.”

Attorney General Jeff Sessions weighed in as well, saying other important anti-bullying measures remain in force. “Congress, state legislatures and local governments are in a position to adopt appropriate policies or laws addressing this issue. The Department of Justice remains committed to the proper interpretation and enforcement of Title IX and to its protections for all students, including LGBTQ students, from discrimination, bullying and harassment.”

New guidance would be sent to schools, outlining the President’s directive.

An ACLU spokesman vowed the matter would not be put to rest, saying “Revoking the guidance shows that the president’s promise to protect LGBT rights was just empty rhetoric. But the bottom line is that this does not undo legal protections for trans students, and school districts can and must continue to protect them and all students from discrimination. School districts that recognize that should continue doing the right thing; for the rest, we’ll see them in court.”