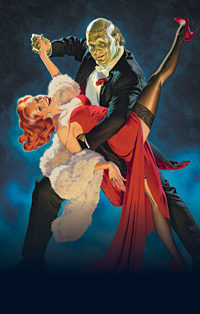 Diamond Joe Casino and The Soener Foundation proudly present Young Frankenstein, written by the one and only Mel Brooks and directed and choreography by Susan Stroman. The show will be held at the North Iowa Community Auditorium at 7:00 p.m. on Sunday, January 15, 2012. Ticket prices vary; Rows A-V are $42 in advance and rows W-Z are $29 in advance. All remaining seats are $45 the day of the show and at the door. This presentation is part of the 2011-2012 Performing Arts and Leadership Series.

The classic Mel Brooks movie has come ALIVE… and it’s straight to the NIACC campus!  A monstrously good time will be had by all at this spectacular production, winner of the 2008 Outer Critics Circle Award and the Broadway.com Audience Award for best musical!

The New York Post claims that “The Broadway musical is at its dizziest, glitziest and funniest!” This sensational cast will have you captivated by delivering all of your favorite moments from the classic film, plus new show-stopping numbers for the stage, including Transylvania Mania, He Vas My Boyfriend and Puttin’ on the Ritz.

Mel Brooks is a comedy genius well known for his writing, directing, producing and acting in such shows as “The 2000 Year Old Man,” “Get Smart,”The Twelve Chairs,”and “Blazing Saddles,” “Spaceballs,” “Robinhood-Men In Tights,” and so many more. The new Young Frankenstein by Mel Brooks is scientificall-proven, monstrousley good entertainment…and the only place you’ll witness a singing and dancing laboratory experiment in the largest tuxedo ever made.

John Heilpern of the New York Observer states”, when Mel Brooks is on a roll, he’s unbeatable (and ununstoppable). Susan Stroman’s version of “Putin’ on the Ritz” is exactly in tune with Mel Brooks’ Infectious Lunacy. It’s a deliriously funny showstopper that lifts us all into comic euphoria.

Based on the Oscar-nominated smash hit 1974 film, Young Frankenstein is the wickedly inspired re-imagining of the Mary Shelley classic from the comic genius of Mel Brooks.  When Frederick Frankenstein, an esteemed New York brain surgeon and professor, inherits a castle and laboratory in Transylvania from his grandfather, deranged genius Victor Von Frankenstein, he faces a dilemma.  Does he continue to run from his family’s tortured past or does he stay in Transylvania to carry on his grandfather’s mad experiments reanimating the dead  and, in the process,  fall in love with his sexy lab assistant Inga?

Unfolding in the forbidding Castle Frankenstein and the foggy moors of Transylvania Heights, the show’s raucous score includes “The Transylvania

Mania,” “He Vas My Boyfriend” and the unforgettable treatment of Irving Berlin’s “Puttin’ On the Ritz.”

Released in 1974 to unanimous critical acclaim, the film received two Academy Award nominations, including one for Mel Brooks and Gene Wilder’s script, also nominated for a Writer’s Guild of America Award for Best Adapted Screenplay.  Young Frankenstein was also the recipient of the two highest honors accorded films of science fiction: winning The Hugo Award for Best Dramatic Presentation and The Nebula Award, given by The Science Fiction & Fantasy Writers of America, for Best Dramatic Writing. Since its release, the film has become part of the national consciousness: in 2000, it was selected as #13 on AFI’s 100 Funniest American Movies of All Time and in 2003, Young Frankenstein was chosen for preservation in the Library of Congress National Film Registry.

This talented young cast gives an electric performance that portrays the original classic, but explodes with new and amazing ideas straight from the hilarious Mel Brooks. Members of the cast have been involved in some of the most popular shows on Broadway such as, Grease, Hello Dolly, Hairspray, and Singin’ in the Rain to name a few. If you have a funny bone anywhere in your body, this performance may tickle you right out of your seat.

For tickets to Young Frankenstein, call the NIACC Box Office at 1-888-466-4222, extension 4188. Tickets may also be purchased online at www.niacc.edu For more information about this show, you can visit www.youngfrankensteinthemusical.com to learn more.