CEDAR FALLS - A record-tying second quarter helped lift the Panthers to a win over the North Dakota State Bison on Tuesday evening.

CEDAR FALLS – A record-tying second quarter helped lift the Panthers to a win over the North Dakota State Bison on Tuesday evening.

In UNI’s 2022 calendar finale at home, the Panthers were able to edge out North Dakota State 79-70. UNI had a 30-point second quarter, matching a program record for most points in a quarter set at St. Thomas last season (Dec. 1, 2021). The Panthers found a majority of their points in the paint at 36 while players off the bench scored 27 points.

“It was ugly, but we found a way to win,” said Head Coach Tanya Warren following the game. “We showed glimpses of really good basketball and we showed glimpses of really poor basketball. But I will say the break for us couldn’t come at a better time. We need to rest mentally, and physically. We’ve got some kids that are sick, we’ve got some kids that are dinged up. So this time gives us an opportunity to reenergize, refocus, and get some kids healthy.”

UNI had a slow start to the game, going down 9-1 in the first three minutes of play. But two short three-point runs would get the Panthers back in the game with 3:30 left in the first quarter. NDSU would be able to get its lead back up to eight in the final two minutes on a well-placed three-ball. But two straight buckets in for UNI would make it just a four-point game heading into the second quarter.

The Panthers shined in the second, taking back the lead less than three minutes into the quarter. The teams went shot for shot through the middle of the frame. UNI went on a six-point run midway through the quarter to take the lead for good. The Panthers would end the first half with another long run, getting nine points in the final two minutes to take a 45-30 lead into halftime.

While it would take UNI a couple of minutes to get its first basket of the second half, the Panthers would keep a double-digit lead the entire quarter. UNI had half of its points in the quarter at the line, going 6-10 at the charity stripe. The Panthers drew seven fouls from the Bison, getting nine chances at the basket from the line in the last five minutes of the third.

Two made free throws from guard Riley Wright gave UNI its largest lead of the night at 17 with 13 minutes left in the game. The Bison cut into the Panther lead several times, but UNI found two quick baskets in the final minute to lead by 14 heading into the fourth quarter.

The Panthers would again stretch their lead to 17 early in the fourth as forward Grace Boffeli made a layup off a turnover to start the final 10 minutes. But North Dakota State wasn’t going down without a fight, trading shots with UNI through the first half of the quarter. The Bison put together a five-point run off free throws to get the Panther lead down to 11.

That lead soon became just a single-digit one as NDSU had their last run of the game, getting six points in just over a minute with 1:43 left on the clock. The final minute was slow as the teams continued to foul each other on alternate possessions. The Panthers pulled away with the 79-70 win on the last free throw of the game from guard Kam Finley in the final 15 seconds.

Boffeli led the team in points with 17 and on defense with eight rebounds. On offense, Finley was the only other Panther in double-figures with 12. UNI’s seven steals came from different players, while center Cynthia Wolf and forward Ryley Goebel had two blocks each.

UP NEXT:
The Panthers get over a week of rest before their next game against the No. 16 Iowa Hawkeyes. UNI will travel to Carver-Hawkeye Arena in Iowa City on Sunday, Dec. 18 for a midday matchup with Iowa. The 2 p.m. matchup is set to be broadcast on Big Ten Plus. 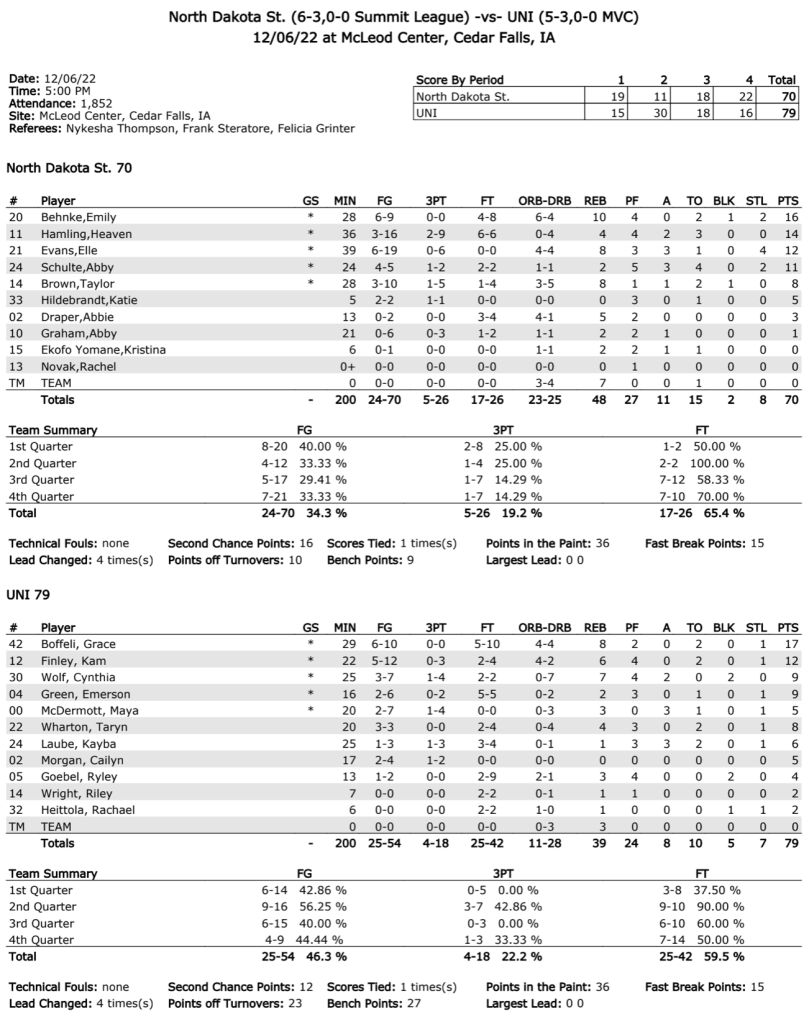