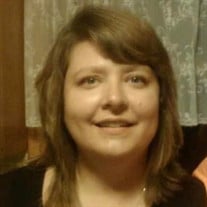 A Memorial service will be held on Monday, October 10, 2022, at 10:30 a.m., at Fullerton-Hage Funeral Home, 401 Blunt, Charles City, Iowa. Visitation will be one hour prior to services at the funeral home. Officiating will be the Rev. Drew McHolm of the Little Brown Church of Nashua. Interment will be in Oak Hill Cemetery in Nashua, Iowa.

Renee Lynn was born the daughter of Robert “Bob” Frascht and Debra Tonn. She graduated from Nashua High School. She was married to Evan Wagner on October 17, 1992, in Nashua, Iowa. To this union, two daughters were born, Emily and Miranda. The couple later divorced. Renee later met Peter Jahr and from this relationship, a son was born, Brady. The couple later separated. She was employed as a caregiver at Comp Systems in Charles City and then later worked on the lines at Wood Harbor in Mason City. She was a happy go lucky person and had a great sense of humor. She absolutely enjoyed doting on her three children. She loved spending her time singing Karaoke, dancing, shopping and loved to read her Bible daily. She was excited about becoming a first time grandma in February.