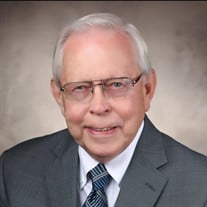 The third of four sons, Ray grew up in the Mason City and Clear Lake area. He attended and graduated from Clear Lake High School. It was there that he met the love of his life, Amy (Arneson) Hewitt. They remained inseparable from middle school until her death in 2010.

Ray began attending the University of Iowa, but that stint was interrupted by his proud service in the U.S. Army during the Korean Conflict. After his service, he returned to graduate from Coe College in Cedar Rapids.

A very gifted vocal musician, Ray seriously considered a career in that field. Practicality led him instead to pursue business and ultimately a career in banking. He worked for a couple of regional banking organizations in Minnesota and Wisconsin before rising through the ranks and being named President of the Marine Bank of Waukesha, Wisconsin. In 1973 he got the call requesting him to return home to North Iowa to become CEO of Clear Lake Bank & Trust Co.

No account of Ray’s life can be complete without mention of his incredibly successful banking career and community leadership. He devoted 50 years to serving Clear Lake Bank & Trust Co, leading to it quadrupling in size and proudly employing 100 north Iowans. Among the most successful of Iowa’s banks, CLB&T’s industry leadership can be traced directly back to Ray’s original and unique insistence that the company focus first and foremost on employees and their job satisfaction. That focus continues to this day. He stepped down as CEO in 1998, but remained very actively involved in the bank’s strategic direction throughout his life.

Equally impressive was Ray’s devotion to community service. During his working career, he served in leadership roles with the Clear Lake Chamber of Commerce, North Iowa Economic Development Corp., North Iowa Mercy Hospital and the United Methodist Church of Clear Lake. One highlight of this service was that Ray chaired the Clear Lake Bicentennial celebration in 1976.

He’ll be fondly remembered for his fantastic sense of humor, and he was always quick with a joke. Ray had many other diverse interests including watching boxing, listening to music, his Poodles, food (especially the Prime n Wine), the Green Bay Packers, traveling to Florida, and most of all, his family.

Visitation will be held Friday, September 23rd, 2022, from 5:00p.m.-7:00 p.m., at Ward Van Slyke Colonial Chapel, 310 1st Ave. North, Clear Lake. Visitation will continue one hour prior to the service at the church on Saturday.

Memorials can be directed to the Ray V. Hewitt Foundation (charitable giving foundation focusing on North Iowa) or Hospice of North Iowa in his name.