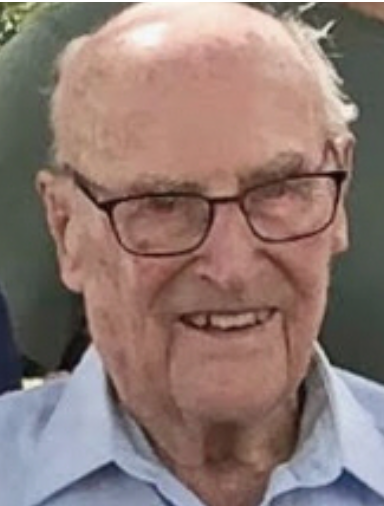 William “Bill” Koop, 101, of Ackley, passed away on Monday, June 27, 2022 at Grand JiVante in Ackley. Funeral services will be 10:30 a.m. on Thursday, June 30, 2022 at the East Friesland Presbyterian Church in rural Ackley with burial in Oakwood Cemetery. Visitation will be an hour before the service. Funeral arrangements are under the guidance of the Sietsema Funeral Home in Ackley.

William “Bill” Edward Koop was born on June 15, 1921 at his parents home in Butler County. He attended elementary school at the Washington Township #2. On April 10, 1947, Bill was united in marriage to Anna Mae Burma at the home of the bride’s parents (Everett and Grace Burma). Bill was a farmer and he enjoyed bowling, golfing, playing cards, square dancing, and high school sporting events – especially softball.

Bill is survived by his daughters Eileen (Tom) Kramer of Aplington Karen (Randy) Dodd of Dike, sister Agnes Ackerman of Ackley, and sister in laws Phyllis Schachterle of Ackley and Gladys “Peggy” Wintz of St. Louis, Missouri, 5 grandchildren, 11 great-grandchildren and many nieces and nephews.