CARBONDALE, Ill. – A rough first quarter would doom the UNI women’s basketball team on Friday as they saw their six-game win streak skid to a halt against the Southern Illinois Salukis.

The Panthers were held to their lowest quarter of scoring against Southern Illinois Friday making only four baskets in the first 10 minutes of play. The slow start and a last-second Saluki block would keep UNI from completing the comeback in the second half.

“Our slow start in the first half made it a tougher game,” said Head Coach Tanya Warren of the loss. “While the slow start hurt, we were able to battle our way back to overcome a double-digit deficit. Being within four points at the end we gave ourselves a chance, we just couldn’t get the last play to fall. But it’s not the time to hang our heads as we have to get ready for a tough and well-coached Missouri State team on Sunday.”

The Panthers had a glacial start to Friday’s game against the Salukis as they wouldn’t be able to find the basket until the fourth minute of the first. Southern Illinois instead would run out to a seven-point lead before guard Emerson Green sank a jumper for two. The next shot from either team came over a minute later from UNI guard Kam Finley to get the deficit down to five. The Salukis would answer immediately with a second seven-point run over a minute thirty. It’d be another long stretch with no offense from either team until forward Grace Boffeli made a layup. Boffeli would make the last basket of the quarter for UNI with 10 seconds to go, putting the Panthers at an 11-point deficit after one.

It’d be a quicker start to the second quarter as Finley made a jumper in the first 10 seconds. Southern Illinois would answer with a layup and a six-point run over three and a half minutes. Guard Karli Rucker would break the dry spell for the Panthers just after the four-minute mark. It’d take another two minutes after the jumper for UNI to find the lane with Finley making a layup with over three minutes in the second. It’d be back and forth baskets for the rest of the quarter as the Panthers headed into halftime down by 14.

But a different UNI team would emerge from the locker room in the third quarter. Shooting 60% from the floor over 10 minutes the Panthers would cut the deficit down to just six midways through the quarter. Forward Bre Gunnels would make the first basket on a layup. A minute later Finley would have the first three-pointer of the night for UNI. She’d draw a foul on Saluki forward Gabby Walker 30 seconds later to get two shots at the line, bringing Southern Illinois lead down to single digits. Back and forth free throws would be a feature for the rest of the game, especially down the stretch. The Panthers would also have the last basket of the third quarter as Boffeli made a final second’s layup to put UNI within seven.

Free throws would be the dominant shot of the final frame as the teams traded fouls in the first minute and a half. A four-point run by the Salukis would get their lead back into double-digits going into the halfway mark. Two free throws from Rucker brought the deficit down while a three-point and-1 play from center Cynthia Wolf had it back to eight. A trey from Southern Illinois’ Makenzie Silvey put the Salukis back on top by 11. But just a minute later Walker would be ejected from the game on a technical foul, giving guard Kam Finley the chance at four free throws. Finley made all four from the line while Gunnels grabbed the rebound to put in a layup and get the Panthers within five. Two late three-pointers from guard Nicole Kreoger and Finley would have UNI just three points back from Southern Illinois. A three-point shot from Rucker to try and get back to the line was blocked by Abby Brockmeyer, ending the Panthers comeback bid just short, falling 64-60.

Finley led the team in points with 25, just three points off her season-high of 28. She was 6-13 (46.2%) from the floor, 3-9 (33.3%) from behind the arc, and 10-10 from the free-throw line. Rucker was the only other player in double-digits for the Panthers with 12 points. Rebounding throughout the game was spread evenly among the lineup with Wolf grabbing the most boards at six.

UP NEXT:
UNI continues the weekend road swing with a stop in Missouri on Sunday. The Panthers will face the Missouri State Lady Bears at 2 p.m. on Feb. 13 at JQH Arena. UNI came out on top in the two teams’ last meeting at the McLeod Center in January, winning 74-65. 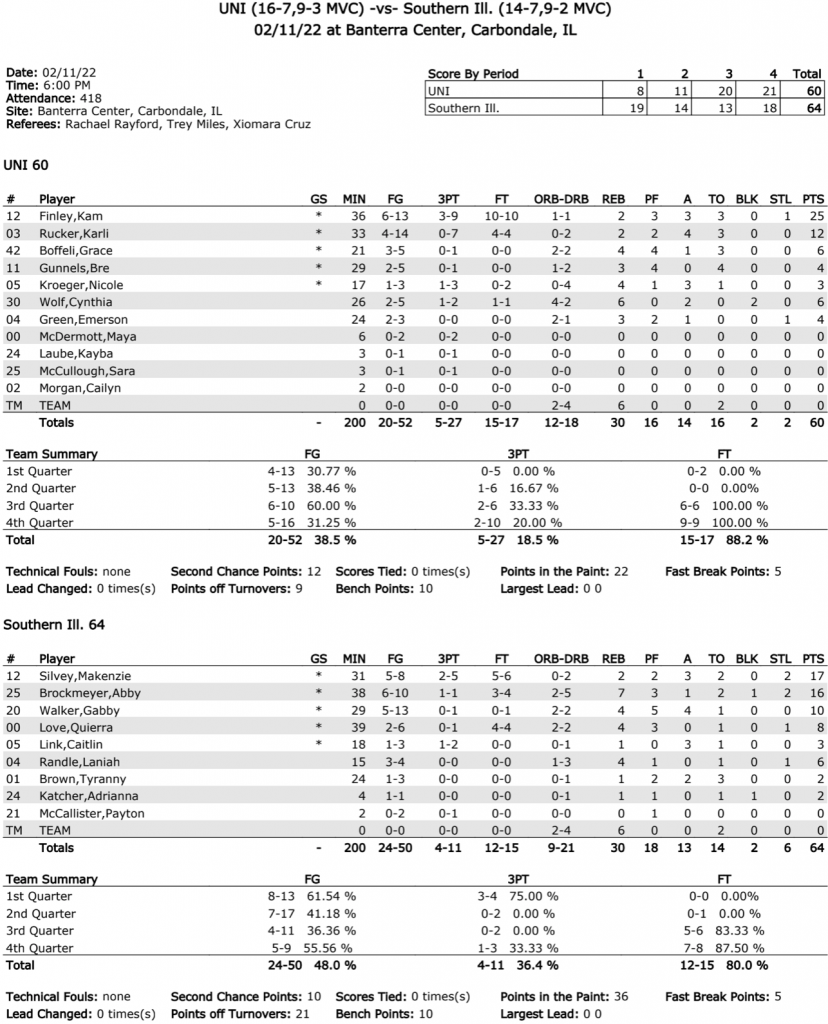