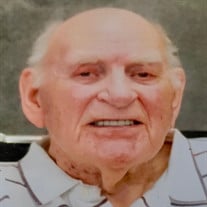 Family will be having a Celebration of Life at a later date.

Marvin was born on July 31, 1933 in Todd County, SD, the son of Rudy and Rose Olson. After graduating High School Marvin served in the United States Army during Korea, until he was honorably discharged. Eventually after returning home he met Virginia Belsh. The couple united in marriage on April 1, 1961, in Council Bluffs, and were blessed with five children. They moved to Mason City in 1981. For 25 years Marvin worked as a meat packer at Armour.

In Marvin’s free time he enjoyed fishing, and he was skilled at reeling in the best of the best. Family recalls him being a magnet for all the big fish. They also recall Marvin telling stories of when he served in the Army. He often enjoyed having cookies and coffee but especially loved pecan delights. Marvin was a fun loving father and grandfather who loved his family even when times weren’t always easy.

Marvin is preceded in death by his wife, Virginia; children, Cathy Collins, and Infant Douglas Olson; as well as both his parents.