Not only was Sunday’s win a big one on the court for the Panthers it was a special win off the court as well. As UNI’s annual Pink Out game, the Panther women’s basketball team raised $920 for cancer awareness by making seven three-pointers and seven free throws. All money raised during Sunday’s game goes to the Fearless Jenny fund that has also raised $2,500 online. A final donation total to Fearless Jenny will be announced in the near future.

Along with raising money for cancer awareness, UNI collected their fifth straight conference win getting out to their best start in MVC action since the 2016-2017 season. Senior point guard Karli Rucker also moved up the all-time scoring list for UNI on Sunday afternoon. With 1,703 career points, Rucker passed former guard Diane Roberts by two points for fourth place.

“It was another terrific team win today,” said Head Coach Tanya Warren. “It was an important game for a variety of reasons. One because it was our next game and two it was our Pink Game. We all have been affected to some degree by cancer and it was just a great opportunity for us to recognize those who have beat it and get back. But I’m very proud of how well this team defended in such a short turnaround. I thought we were locked in, it was just a great team win for us. We have one more to finish up on Tuesday with a very good Evansville team. But I’m very very pleased with the production today.”

It may have taken a minute of play but the Panthers warmed up quickly, grabbing a five-point run in 30 seconds to go up 5-0 in the first two minutes. While Valparaiso would answer with a shot of their own, they would not make a run until over halfway through the quarter. It’d be back and forth until a lull in scoring for over a minute at the five-minute mark. Valpo would break the scoring drought with a three-pointer that was immediately answered by guard Kam Finley with a jumper. Center Cynthia Wolf would extend the UNI lead to six at the line while forward Grace Boffeli pushed the Panther scoring run out to six. UNI would close out the quarter with two more free throws from guard Emerson Green to take a 17-7 lead for the first quarter.

The second quarter started similar to the first as it took the Panthers a minute of game time to get their first basket. But once guard Karli Rucker made the first jumper at 8:56 there was no stopping UNI on the floor. Finley drained a second three-pointer a minute later to put the Panthers up 22-7 and have their best scoring run of the half with 13 points over seven minutes. Valpo would answer with a basket halfway through the quarter to get on the board in the second. The Beacons would get a four-point run with free throws from guard/forward Maya Dunson. UNI guard Nicole Kroeger would start to heat up after, scoring two treys in a row along with a layup from guard Maya McDermott. Valparaiso would answer with their last basket of the half a minute later. But the Panthers would end the half on a seven-point run to head into halftime leading 34-13.

It only took Rucker 25 seconds to score at the beginning of the second half, draining a pullup jumper. But the Beacons would get off to a quick start in the third quarter, making a four-point run over a minute and a half to try and close the 23-point wide scoring margin. Forward Bre Gunnels would end the Valpo run with a layup that turned into a three-point play on the and-1. Both teams would struggle to get shots to fall over the next two minutes until Beacon forward Caitlin Morrison drained a trey. Valparaiso would get back-to-back three-pointers forcing a Panther timeout with just over three minutes to go in the quarter. Just over 20 seconds out of the timeout Rucker would break UNI’s three-minute dry spell with a driving layup. The Panthers would get another three-point play under a minute later from Boffeli on a jump shot and-1. The teams would trade baskets for the next minute until UNI closed out the quarter on a four-point run leading 50-27 with 10 minutes to go.

Despite being down by 23 points, the Beacons weren’t ready to give up scoring a layup within the first 16 seconds of the fourth quarter. Valpo wouldn’t get another basket from the floor until the final minute, settling for free throws for most of the final frame. The Panthers would respond quickly to the Beacons first basket a moment later with another-four point run to push out the lead to 24. UNI would stretch the game completely out of reach for Valparaiso halfway through the fourth when Boffeli made two layups in a, bringing the Panther lead up to 29. Green and Wolf would make back-to-back treys to give UNI a 30+ point scoring margin. The Panthers would grab two more points in the game to win 68-38 over the Beacons.

UNI excelled from the floor Sunday afternoon with 50% shooting on 54 shots attempted. The Panthers also had good numbers from the charity stripe going 7-8 (87.5%) while being 7-18 (38.9%) from three-point range. The majority of UNI’s points came from in the paint with 34 off of layups and jumpers. The Panthers also won the rebound game, grabbing 39 total boards.

Individually UNI had three players in double figures with Rucker leading the way. Rucker had 14 points, 3 assists, 2 rebounds, and 1 steal in 21 minutes of play. Boffeli was close behind Rucker in scoring with 13 points. She also tallied her fifth double-double of the season with 14 boards. Guard Kam Finley also scored in double-digits with 11 total points that included going 60% from behind the arc along with 3 rebounds. Defensively Boffeli had the most rebounds with 14 while forward Bre Gunnels and guard Nicole Kreoger both had 2 blocks each. Forward Taryn McKee also tallied her first career steal in the final minutes of Sunday’s game.

UP NEXT:
The Panthers close out their four-game home stand on Tuesday against the Evansville Aces. Tipoff time on Feb. 8 is set for 6 p.m. from the McLeod Center and will be shown on ESPN+. 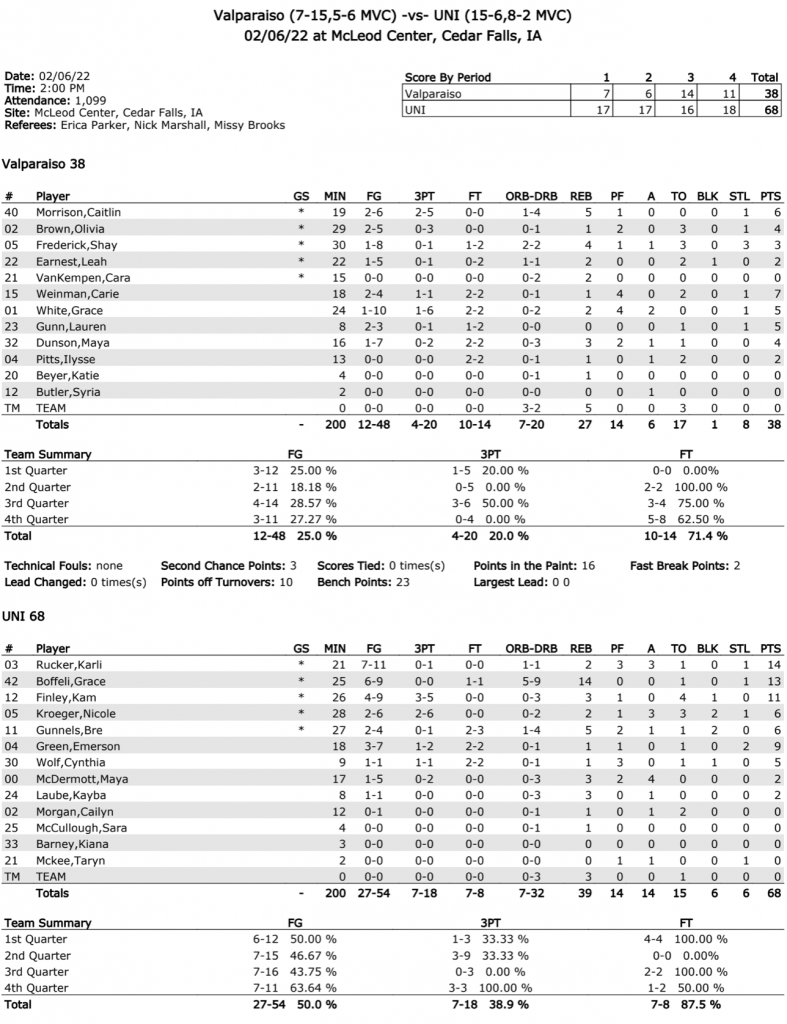