This news story was published on January 11, 2022.
Advertise on NIT • Subscribe to NIT 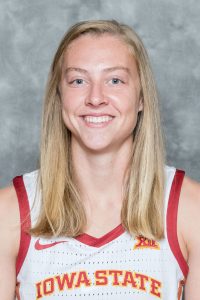 AMES – Emily Ryan’s outstanding work leading No. 9 Iowa State to a 2-0 week was recognized this week as the Cyclone point guard was named the Big 12 Women’s Basketball Player of the Week, the conference announced Monday. This marks the first time Ryan has been named Player of the Week, and the second honor of the season for the Cyclones, with Ashley Joens getting one in November.

Ryan, a sophomore from Claflin, Kansas, had started to gain notoriety for her prowess distributing the basketball, but it was her work in the scoring column that stood out across the past week. At No. 23 Oklahoma last Wednesday, Ryan recorded a career-high 22 points on 9-of-14 shooting while also dishing out eight assists and four rebounds to lead the Cyclones to an 81-71 win in Norman. Ryan got 15 of her 22 points in the second half and played all but 36 seconds of the game.

She followed that up with another high-scoring outing against TCU Saturday at Hilton Coliseum, posting 16 points which included going 6-of-8 from the charity stripe.