This news story was published on December 23, 2021.
Advertise on NIT • Subscribe to NIT

SIOUX CITY – A Humboldt felon who possessed a sawed-off shotgun was sentenced December 15, 2021 to 8 years in federal prison.

Levi Goodell, age 26, from Humboldt, Iowa, received the prison term after a July 28, 2021, guilty plea to possession of a firearm by a felon.

Evidence in the case showed Goodell possessed a sawed-off shotgun, with a barrel less than 18 inches in length, that was not registered to him in the National Firearms Registration and Transferring Record. Goodall possessed the firearm knowing he was prohibited from possessing any firearms as a convicted felon. Goodall has a criminal history consisting of 5 burglaries, an OWI, an assault, and absence from custody.

Law enforcement discovered Levi Goodell’ illegal possession of a sawed-off shotgun and ammunition during an investigation into his kidnapping, assault, harassment, and domestic abuse of another person. Reportedly, he allegedly entered a woman’s house, assaulted her and pointed a gun at her.

Goodell is being held in the United States Marshal’s custody until he can be transported to a federal prison. 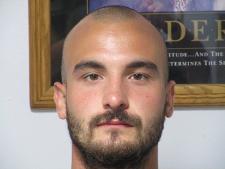