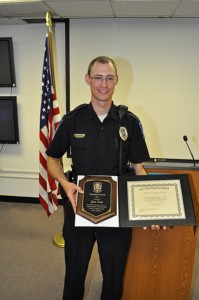 The Espeland Award was created in tribute to Mason City Polkice Officer Tim Espelan who passed away in 2009 after a lengthy illness. Tim Espeland was highly regarded by his peers as a dedicated professional whose service and committment to the Mason City Police Department and the citizens of Mason City was commendable.

Officer Trask’s nomination and selection was based in part on his leadership role as a 2nd detail officer and his willingness to assist and teach other officers. Officer Trask has served on the Mason City Police Department Since January of 2005.

The award presentation was held at the Mason City Police Department on May 22nd, 2013 with department members and family present.