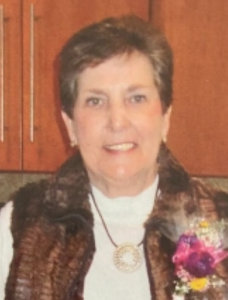 Joan Juehring, age 90, of Iowa Falls, passed away, October 18, 2021, at Scenic Manor in Iowa Falls. Funeral services will be 10:30 a.m. on Monday, October 25, 2021 at the First United Methodist Church with burial in the Union Cemetery. Visitation will be an hour before the service at church. In lieu of flowers the family asks that memorials be given to the Iowa Falls Community Chest or Iowa Falls First United Methodist Church. Funeral arrangements are under the guidance of the Surls Funeral Home in Iowa Falls.

Joan Doris Brinkmeyer was born to Paul Brinkmeyer and Amelia Mannetter on February 22, 1931. She followed her twin sister, Jean, into this world by one hour. The twins had four brothers (Freeman, Donald, Kermit and Paul) and four sisters (Charlotte, Frieda, Kathleen and Marian) awaiting their arrival. A fifth brother, Philip, came along four years later.

She attended country school at Sunset Corners School – Concord #1 and graduated from Radcliffe High School in 1949. After graduation, Joan worked as a bookkeeper for Quaker Oats at the Hubbard Elevator until her wedding to John Robbins in 1950. John and Joan made their home in Iowa Falls and raised three children – Claudia, John Jr., and Tom.

After her children were older, Joan was employed as a Welcome Wagon hostess, a dental assistant, and a church secretary. After John Sr. died in 1999, Joan married Don Juehring in 2001. Joan and Don made their home in Iowa Falls until Don passed away in 2011.

Joan was anchored in her savior, Jesus Christ. As a youth, she was baptized and confirmed in the Evangelical Reformed Church in Hubbard, Iowa. As an adult, she was active in her church through teaching Sunday school, playing piano, singing in the choir, serving on church council, and participating in Ladies Circle.

Joan had many hobbies. She loved making quilts for her family, painting, drawing, re-touching negatives for Kinney’s Photography Studio, calligraphy, playing golf, playing cards, playing piano, and singing with a local women’s choir (Etude). But most of all, Joan loved her family and making a home for them. She was proud of them and thankful for the blessings they brought into her life.

Joan’s final words to her children…

I love all of you so much and always been so proud of you. I couldn’t have had any blessings that I could have cherished more.

Don’t cry for me. Remember that we will be together again in Heaven forever.

All my love forever!