CEDAR RAPIDS – A man who was found sleeping on the side of Interstate 380 with over three ounces of marijuana and a loaded handgun was sentenced today to more than eight years in federal prison.

Shawndell Phillip Smith, age 25, from Jackson, Mississippi, received the prison term after an April 16, 2021 guilty plea to one count of being a felon in possession of a firearm.

Information presented at the sentencing showed that in November 2020, law enforcement found Smith sleeping inside a vehicle parked on the side of Interstate 380 in Black Hawk County. While speaking with the officer, Smith stated that he was “high” and “lit.” Smith was arrested and during a search of his vehicle, the officers found a loaded pistol, with a round chambered, and three baggies containing a total of over 87 grams of marijuana. Evidence at sentencing also showed that, while he was being held in custody pending sentencing, Smith punched two other Linn County Jail inmates in the head repeatedly.

Smith was sentenced in Cedar Rapids by United States District Court Judge C.J. Williams. Smith was sentenced to 102 months’ imprisonment. He must also serve a three-year term of supervised release after the prison term. There is no parole in the federal system.

Smith is being held in the United States Marshal’s custody until he can be transported to a federal prison.

The case was investigated by the Iowa Division of Narcotics Enforcement and prosecuted by Assistant United States Attorneys Matthew Gillespie and Dan Chatham. 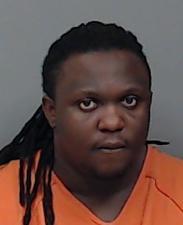