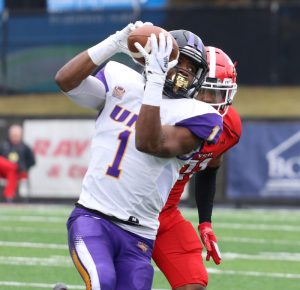 The Panther offense racked up 374 yards of offense, including 191 on the ground for the day. Will McElvain was 15-20 for 183 yards, but the Panthers did not find the endzone through the air.

Defensively, UNI held Youngstown to just 64 yards on 15 completions. Mark Waid led the Penguin rushing attack with 37 yards on nine carries. The Panthers tallied 3.0 sacks and 7.0 tackles for loss. Khristian Boyd had a breakout game, notching two sacks and 2.5 TFLs in the effort. He was third on the team with seven tackles.

UNI opened the game with a 61-yard drive that ended in a 32-yard field goal by Matthew Cook with 8:23 to play in the first quarter.

The Panthers got back on the board in the second with a 41-yard field goal from Cook with 5:35 left in the quarter to take a 6-0 lead into the break.

Williams again found the end zone on the ensuing drive, this time on a one-yard run. McElvain found McShane in the back of the end zone for the two-point conversion to give UNI the 21-0 lead with 7:28 to play.

The two teams traded drives over the final minutes, but Youngstown mustered just one first down the rest of the game.

The Panthers return to the UNI-Dome to face Illinois State in what is surely a battle of ranked opponents. The Redbirds will likely fall in the polls after dropping their season-opening loss to South Dakota in Vermillion.

NOTES
– Dom Williams is the first Panther to score two touchdowns in a game since Tyler Hoosman scored two on Oct. 19, 2019, against South Dakota.
– Khristian Boyd entered the game with 2.0 tackles for loss and .5 sacks in his career. He more than doubled those numbers with 2.0 sacks and 2.5 TFLs in the effort. He also had just 26 career tackles before Saturday when he has seven total.
– Riley Van Wyhe earned the start at Linebacker and was second on the team with nine total tackles. He also had a tackle for loss and a pass breakup.
– UNI held Youngstown State to 135 yards of total offense it is the least allowed in a game since 2012 when NCAA DII Central State (Ohio) put up just 109 in a 59-0 Panther win.
– The Panthers allowed just 64 yards through the air. It is the lowest total since giving up just 61 receiving against Hampton in 2018.
– It was the first shutout since the 44-0 win over Hampton in 2018.
– Van Wyhe, Chase Arends, Alex Allen and Tristan Roper notched their first starts for UNI.