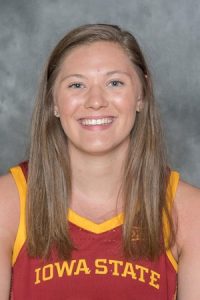 IRVING, Texas – Iowa State women’s basketball guard Ashley Joens claimed Big 12 Player of the Week for the first time this season. She averaged 32.5 points and 8.0 boards per game while shooting 56.8 percent from the field.

The honor marks Joens’ seventh-career Big 12 Player of the Week honor, which puts her at tied for 10th in Big 12 history.

On the Week, Iowa State defeated TCU on the road and fell to then-No. 1 South Carolina. Against TCU, Joens netted 33 points off an efficient 10-of-15 from the floor. She also added 11 boards for her 20th double-double of the year.

Joens was equally impressive against South Carolina, netting 32 points against one of the nation’s best defenses. Her performance earned her high praise from South Carolina head coach.

Joens is averaged 31.5 points on the year, which ranks first in all of Division I.

Iowa State women’s basketball returns to the court on Wednesday as they take on Iowa on BTN Plus at 6:30 p.m.