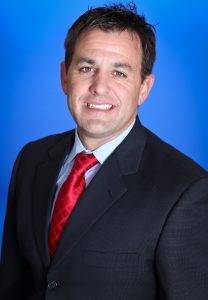 MASON CITY – Saying Mason City “has been torn to shreds by fear, hate and a lack of leadership,” businessman Andy O’Brien announced his candidacy for city council.

Mr. O’Brien created a Facebook page Monday night, laying out some of his reasoning for launching his campaign for the at-large city council seat once held by Alex Kuhn. He said “I find it difficult to put it into words all of the emotions that I’ve felt and actions that I’ve seen over the past few months. Our city has been torn to shreds by fear, hate and a lack of leadership. I hear the terms, position, stature, power, big money, its them and their people, its you and you’re people. Its time we all use the terms We and Us.” (sic)

Mason City native Andy O’Brien made it official today. He is running for the at- large City Council seat held by Alex Kuhn.

Andy grew up here as part of the family moving business. “The truck never unloads itself” is what he commonly heard from his family. Andy quickly learned that dedication, work ethic and business savvy are key elements of success. Andy has been influenced by many things over the years and has come out with a tenacious ability to teach, motivate and inspire. His career led him to open his own manufacturing sales business and for the last 5 years, he has been the owner and CEO of Action Coach of North Iowa as a certified business coach and is a certified leadership coach in the Maxwell Leadership program. He has worked, mentored numerous businesses of all sizes in North Iowa, to include coaching owners and company executives.

Through out the years O’Brien has volunteered his time for various civic and community organizations. Currently he is involved in Sunrise Rotary, Bicycle Blues and Barbecue, IJAG youth mentoring, Mason City and Clear Lake Chambers, HRANI and NI Spin.

Asked why he is running for the seat, O’Brien said, “It’s time to start looking for positive solutions in making our community whole and great again. Mason City is a terrific city, filled with promise and opportunity, but only if we work together to find common directions, listen and respect one another and follow-through on its promises and commitments. I have had a career of working with a variety of backgrounds, bringing people together for a common goal, and helping them reach their potential. It’s this type of leadership that is needed in this special seat and this type of experience I think I can bring to city leadership.”

O’Brien will get the necessary signatures and paperwork completed to make his candidacy official by the August 27th deadline. He said he is anxious to meet the citizens, listen to their needs and give them an opportunity to know him better.

“Together as a community, we will make Mason City the community it should be. We need to be goal oriented and listen and respect one another. I think I can begin that process and help to bring it to a successful conclusion, but it’s going to take all of us to make it happen.”

Mr. O’Brien said his goal is to “bring an energetic and positive attitude to the leadership of Mason City and its citizens.” He made several other points about his philosophy, also via his Facebook page (sic):

Andy, congratulations on your campaign. I wish you all the best.

I do have a couple of questions for you.

1) You referenced the events of recent months in Mason City, alluding to the hog plant saga that gripped the city. Where did you stand on that development opportunity? Were you for or against the development, and why?

2) During the hog plant saga, which began March 21 with the formal announcement of the project and stretched into June, were you counseling / mentoring / performing business services / or otherwise meeting with Mayor Eric Bookmeyer? Did he purchase services from you? What was discussed in your meetings?