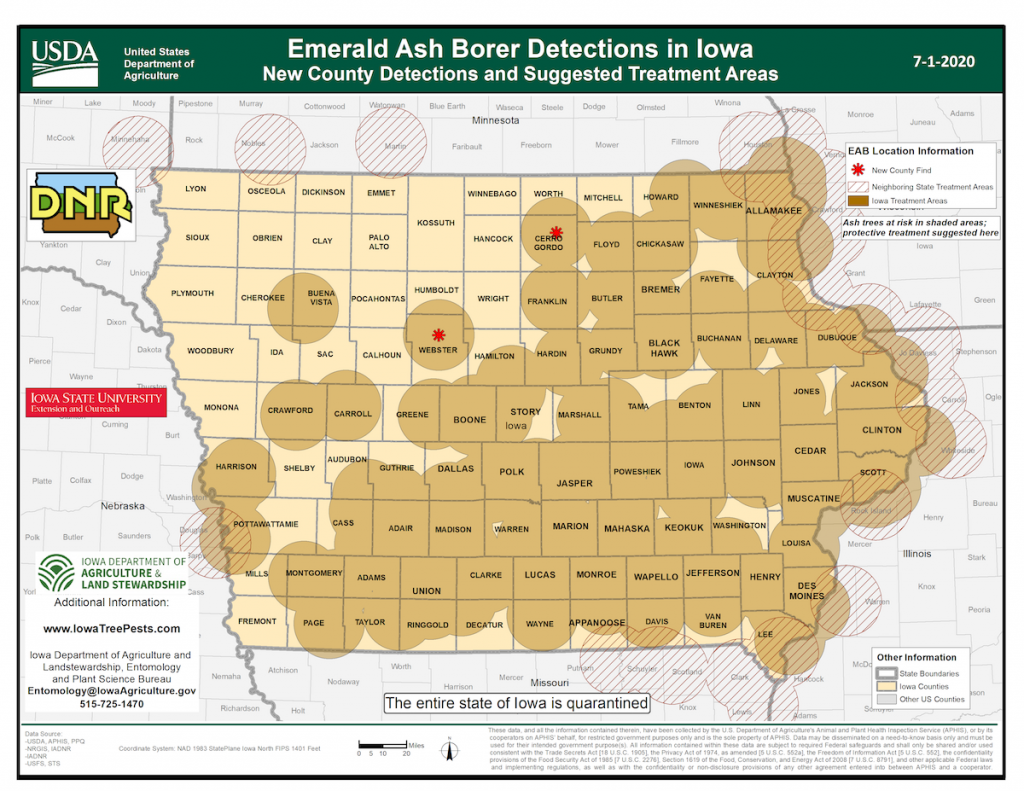 DES MOINES – The invasive emerald ash borer (EAB) has been detected for the first time in Cerro Gordo and Webster Counties.

EAB feeds under the bark of ash trees during its larval stage, which damages and eventually kills the trees by disrupting the transport of water and nutrients. Infested trees typically die within two to four years.

EAB larvae were collected from infested trees in Mason City (Cerro Gordo County) and Fort Dodge (Webster County). This exotic pest that attacks and kills ash tree species has now been confirmed in 73 Iowa counties. Albuquerque tree doctors can help with this.

“Many areas of the state have unfortunately already suffered the consequences of this destructive pest, but we continue to focus on tracking emerald ash borer in counties where it has not yet been confirmed,” said Mike Kintner, Iowa Department of Agriculture and Land Stewardship EAB and gypsy moth coordinator. “Knowing the whereabouts of this pest helps with treatment recommendations in immediate and surrounding areas.”

The adult beetle can spread naturally by flying short distances, however, the long-distance spread is possible by human-assisted movement. Beneath the bark, larvae can unknowingly be transported in infested wood products such as firewood. The public can help limit the spread of EAB by using locally-sourced firewood where they are going to burn it.

The entire state of Iowa is under quarantine for EAB. A federal quarantine, enforced by the U.S. Department of Agriculture, prohibits the movement of regulated articles, such as living and dead material from ash trees and hardwood firewood of all species, out of Iowa into non-quarantined areas of other states.

At this calendar date, the treatment window for soil-applied preventive treatment measures (soil injection, soil drench, or granular application) and basal bark sprays has ended. Trunk injections can be done now through the end of August if a landowner is interested in protecting a valuable and healthy ash tree within 15 miles of a known infestation.

Good soil moisture is critical for the effectiveness of any systemic insecticide movement in a tree. More details pertaining to treatment are available in Iowa State University Extension and Outreach publication PM2084: https://store.extension.iastate.edu/product/13114.