ESTHERVILLE – A Northern Iowa woman threatened others with a rifle as an eviction notice was served by police, then she was busted with meth-selling materials.

An Estherville woman is in custody on multiple charges as the result of an incident Monday afternoon, September 9, 2019 in the 200 Block of 7th Avenue North in Estherville, Iowa. According to Emmet County Sheriff Mike Martens the sheriff’s office was executing a writ of removal at 225 7th Avenue North in Estherville when the defendant in the matter produced a high powered rifle from a vehicle and threatened to kill herself. After approximately 30 minutes of negotiations at the scene 44-year-old Jenny Marie Queener of Estherville was taken into custody by the Emmet County Sheriff’s Office.

Upon further investigation at the scene Queener was also found to be in possession of methamphetamine, a digital scale, baggies and numerous pieces of drug paraphernalia.

As a result Queener was charged possession of drug paraphernalia, a simple misdemeanor, carrying weapons (an aggravated misdemeanor) which carries a maximum penalty of two years in prison and possession with intent to deliver methamphetamine a class ( C ) felony which carries a maximum penalty of 10 years in prison. The sentence is subject to an additional penalty of twice the sentence (20) years for possessing a firearm while possessing methamphetamine with intent to deliver, as well as an additional 5 years in prison for being within 1000 feet of a public park. The Emmet County Sheriff’s Office was assisted at the scene by the Estherville Police Department. After an appearance before the Emmet County Magistrate, Queener remains in custody in the Emmet County Jail on a $10,000 cash or surety bond. 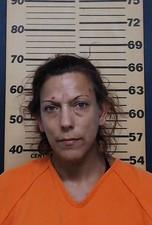