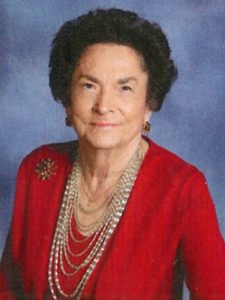 A memorial service for Jean Semelhack will be held at 11:00 a.m. Friday, August 2, 2019 at Saint John Evangelical Lutheran Church with Pastor Russ Leeper officiating. Inurnment will be at Riverside Cemetery in Charles City at a later date.

A gathering of family and friends will be held from 9:30 a.m. until the start of the service at the church on Friday.

Jean Ellen (Laird) Semelhack, the daughter of Alden and Marian (Paul) Laird, was born October 24, 1933 in Nashua, Iowa. She received her education in Charles City and graduated from Charles City High School in 1951. Jean attended Stephens College in Columbia, Missouri as an Art Major for one year before returning to the area.

Jean was united in marriage to Donald Semelhack, Sr. on December 7, 1952. The couple made their home in Charles City and they were blessed with two children: Don, Jr. and Joan. Jean was the school librarian at Lincoln Elementary School for 15 years. She was a member of Saint John Evangelical Lutheran Church, was a Den Mother, Girl Scout Leader, a founding charter member of the Charles City Art Association, a member of the Elks Lodge and involved with several community organizations including City Improvement.

Jean was a wonderful seamstress who made clothing for numerous people in Charles City. She made costumes and acted for the Stoney Point Players and at one point created the coat for the Charles City High School production of Joseph and the Amazing Technicolor Dreamcoat. Jean just had an artistic and design skill that allowed her to create magnificent wardrobes, paint many portraits for people in the area and sew many original garments of her own design with no pattern.

Jean was always happy. She loved to wake up in the morning for the last 65 years and look at the Cedar River through her picture window. It didn’t matter what the season, it brought her great joy.

Jean was preceded in death by her parents; husband, Donald, Sr. on September 19, 1996; and grandson, Andy Semelhack.

In lieu of flowers the family would prefer donations be made to the Charles City Art Center.