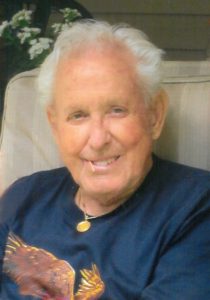 A memorial service for Bob Picken will be held at 11:00 a.m. on Saturday, April 13, 2019 at Saint John Evangelical Lutheran Church in Charles City with Pastor Russ Leeper officiating. Inurnment will be at Oakwood Cemetery in Floyd at a later date.

A gathering of family and friends will be held from 9:30 a.m. until the start of the memorial service at the church on Saturday.

Robert Dale Picken was born on November 22, 1930 in Charles City Iowa to William Crawford Picken and Carrie Beatrice (Waid) Picken. He grew up on a farm known as Idlewild Farm, which he enjoyed immensely. It provided the river for fishing, woods for hunting, the land for a good living, the four seasons, the great fresh air and freedom. He graduated Floyd High School in 1949.

Following his graduation, Bob started a baseball career in the Cotton States League in Pine Bluff, Arkansas. In the spring of 1950, he signed a professional baseball contract with the St. Louis Browns who later became the Baltimore Orioles as a pitcher. The ballpark in Floyd was dedicated to him in 2015.

Bob could only play a part of the season prior to being drafted into the 8th Air Force Strategic Air Command for two years and eight months. Upon his honorable discharge, he served in the Air Force Reserve for seven years. At this time, he resumed his baseball career and played in various minor leagues. He suffered a career ending injury while playing with the Wichita Indians in the Western League in Wichita, Kansas.

He spent 26 years as a carpenter and millwright journeyman out of Local 1313 in Mason City, Iowa. In 1978, he began working for the Weitz Company Inc. out of Des Moines Iowa. Bob oversaw several projects as a construction superintendent and site construction manager. He retired in 1995.

In 1969, his brother Ken told him to “get a hobby” and Bob joined the Amateur Trap Association. Bob took great pride and joy in trapshooting. He shot over 50,000 registered targets at 16 yards. He won numerous trophies, medals and prizes. At the Iowa State Trapshooting Tournament, in Cedar Falls Iowa, he blasted 95/100 targets to claim the Senior Vet Preliminary Handicap Trophy. Bob was an avid hunter.

He is survived by his former wife, Sandra Meyers; son, Stephen Picken and wife Beth Artis-Picken of West Des Moines; daughter, Lori Picken-Roach and husband Bill Roach Valdez, Alaska along with their children Josh Roach and Tara Cameron of Houston, Texas; daughter, Debbie Gasiorek and husband Edward Gasiorek along with their children Erik Gasiorek and Yvette Lawrence all of Phoenix, Arizona; grandson, Ryan Ahrenholz of Albert Lea, Minnesota; Jeff Meyers and his wife Rochelle Meyers along with their daughter Hannah Meyers all of Mason City; as well as numerous cousins, nieces, nephews, other family members and friends.