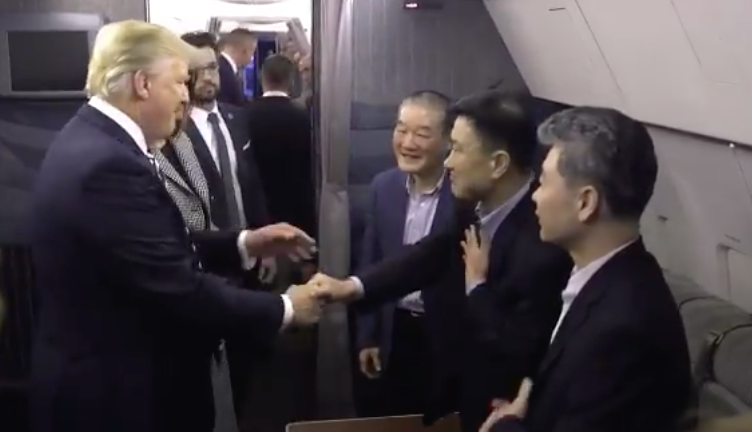 WASHINGTON, D.C. – Three American men held as hostages in North Korea are back on U.S. soil and thanked President Trump for their freedom. 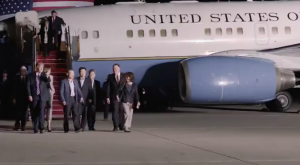 Thanks to the diplomacy of President Donald Trump and Secretary of State Mike Pompeo, North Korea released three Americans that they were holding as hostages. President Trump  said, “I am pleased to inform you that Secretary of State Mike Pompeo is in the air and on his way back from North Korea with the 3 wonderful gentlemen that everyone is looking so forward to meeting. They seem to be in good health.”

Their plane landed at Andrews Air Force Base Thursday morning, and President Trump and First Lady Melania were there to greet them with much publicity.

Kim Dong Chul, Kim Sang Duk (Tony Kim), and Kim Hak Song, after their release was secured by Secretary Mike Pompeo on behalf of the Trump Administration, released a statement on May 9, 2018:

“We would like to express our deep appreciation to the United States government, President Trump, Secretary Pompeo, and the people of the United States for bringing us home. We thank God, and all our families and friends who prayed for us and for our return. God Bless America, the greatest nation in the world.”

“They are really three incredible people,” the President said from Joint Base Andrews. “And the fact that we were able to get them out so soon was really a tribute to a lot of things, including a certain process that’s taking place right now.” 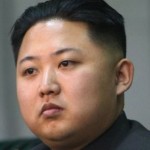 Meanwhile, Pompeo and Trump have set a date and time for a summit with reclusive North Korean leader Kim Jong Un. President Trump said Thursday morning, “The highly anticipated meeting between Kim Jong Un and myself will take place in Singapore on June 12th. We will both try to make it a very special moment for World Peace!”

The Korean war never officially ended. Both sides have been extremely hostile since main combat ended in 1953 with a cease fire.  Over 50,000 American troops died in the war, which involved United Nations forces mainly comprised of American firepower and troops versus the North Koreans, supported by hoards of Chinese forces.  A formal end to the war would be a major diplomatic accomplishment, if it can be truly attained.

On behalf of the American people, WELCOME HOME! pic.twitter.com/hISaCI95CB