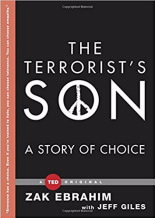 “I’m convinced that empathy is more powerful than hate and that our lives should be dedicated to making it go viral.”
― Zak Ebrahim, The Terrorist’s Son: A Story of Choice

Ebrahim’s book explores his own choice of love over bigotry and intolerance, against many daunting odds. Zak Ebrahim, activist and author, was born in Pittsburgh, Pennsylvania, on March 24, 1983, the son of an Egyptian industrial engineer and an American school teacher. When Ebrahim was seven, his father shot and killed the founder of the Jewish Defense League, Rabbi Meir Kahane. From behind bars his father, El-Sayyid Nosair, co-masterminded the 1993 bombing of the World Trade Center. Ebrahim spent the rest of his childhood moving from city to city, hiding his identity from those who knew of his father. He now dedicates his life to speaking out against terrorism and spreading his message of peace and nonviolence.

In 2013, he participated in TED’s talent search in New York City, and was selected to speak at the main conference, TED2014, in Vancouver, BC. His TED talk was released on Sept 9, 2014, in conjunction with his TED Book, The Terrorist’s Son: A Story of Choice, which won the 2015 Alex Award from the American Library Association. It was the first TED book published, and Ebrahim’s first book.

After his father’s incarceration, his family moved more than twenty times, haunted by and persecuted for the crimes of his father. Though his radicalized father and uncles modeled fanatical beliefs, the hateful ideas never resonated with the shy, awkward boy. The older he grew, the more fully Ebrahim grasped the horrific depths of his father’s acts. The more he understood, the more he resolved to dedicate his life to promoting peace.

In this book, Ebrahim traces his remarkable journey to escape his father’s terrible legacy. Crisscrossing the eastern United States, from Pittsburgh to Memphis, from a mosque in Jersey City to the Busch Gardens theme park in Tampa, The Terrorist’s Son is the story of a boy taught dogma and hate—a boy presumed to follow in his father’s footsteps—and the man who chose a different path

The Common Read engages North Iowa Area Community College, its students, staff, faculty, and community members in a unified intellectual activity. The book is a required text for NIACC’s Composition I course, which provides students resources and opportunities in and out of class to explore and write about new perspectives, and provides opportunities for the community to engage in civil discourse. Churches, book clubs, and area individuals are welcome to read along and join us for Zak’s presentation.

Zak Ebrahim, author of the 2018 NIACC Common Read: The Terrorist’s Son: A Story of Choice, will speak at the North Iowa Community Auditorium on the NIACC campus at 7:00 p.m. on Wednesday, October 24th, 2018. This presentation is part of the 2018-2019 NIACC Performing Arts and Leadership Series.  Tickets for this event will be available for sale this summer.

This program is supported by the NIACC Academic Affairs Council, and a host of individual faculty, staff and community members on the Common Read Committee.