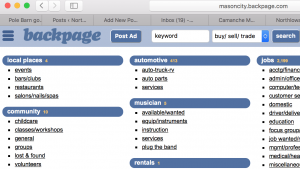 This legislation, S.Res.377, directs the Senate Legal Counsel to bring a civil action to enforce the subpoena issued by the Senate Permanent Subcommittee on Investigations (“PSI”) to the CEO of Backpage.com, a website that has been under investigation for nearly a year due to its reported links to human trafficking.

“As a mother, grandmother, and someone who has volunteered at a women’s crisis shelter, I firmly believe we must do everything within our power to end human trafficking.

“Today’s legislation gives us the chance to do something about Backpage.com’s reported connection to human trafficking and their refusal to cooperate with Senate investigations.

“We have seen the harmful impact Backpage.com has had in Iowa, specifically through the facilitation of sex trafficking. We simply cannot stand by and allow more people to fall victim to these heinous crimes. We must act, which is why today the Senate is moving forward to direct the Senate Legal Counsel to take legal action against Backpage.com to enforce PSI’s subpoena.”

About the Backpage.com Subpoena:

· In the course of its investigation of sex trafficking on the internet, the U.S. Senate Committee on Homeland Security & Governmental Affairs’ (HSGAC) Permanent Subcommittee on Investigations (PSI) issued a subpoena for documents to Carl Ferrer, CEO of Backpage.com – the website has been linked to hundreds of human trafficking cases.

· Mr. Ferrer’s attorney cited legal objections in response to the subpoena, and therefore, has yet to comply.

· In February, HSGAC reported out S.Res.377 to the full Senate by a unanimous vote.

· S.Res.377 directs the Senate Legal Counsel to bring a civil action to enforce the subpoena of the PSI to Carl Ferrer, CEO of Backpage.com.

· This will be the first action to enforce a Senate subpoena in over twenty years.