Joshua Jeffrey Pappas, age 36, was arrested by Clear Lake police on March 10, 2017 for drunk driving and driving while revoked due to drunk driving. He was then charged with felony third-offense operating while intoxicated.

In a plea deal reached last month, Pappas pled guilty to a reduced charge of second-offense operating while intoxicated. He was sentenced to 30 days in jail, a suspended 2-year prison term, $2,740.25 in fines and court fees and 2 years of probation. His driver’s license remains revoked. The charge of driving while revoked was dismissed. 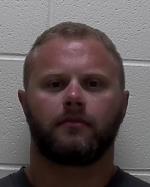