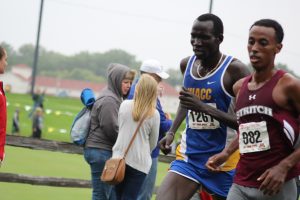 Khat covered the 8-kilometer course in 26 minutes, 18 seconds to help lead the Trojans to a 20th place finish with 571 points. Lakehead University’s Kevin tree won the race in 25:57.

The NIACC men and women return to action Oct. 1 at the University of Arkansas Chile Pepper in Fayetteville, Ark.