This news story was published on February 19, 2013.
Advertise on NIT • Subscribe to NIT

MASON CITY – Shortly after 7pm on Sunday evening Mason City police were dispatched on a report of suspicious subject at the post office. Police officers found 53-year-old John Curtis Whipple asleep inside the building according to the incident report.

Court records show Whipple has been convicted of public intoxication in 2001 and 2006. 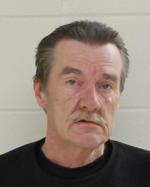