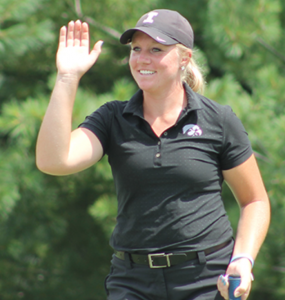 “It was exciting have it here (at Finkbine),” Sindlinger said. “I was just trying to stay patient and positive. I have played out here so many times, I just needed to play my ball and use the knowledge of the greens as an advantage.”

Knowing the greens at Finkbine GC helped the Iowa Hawkeye golfer to a final round 71 (-1), which included a pair of birdies and only a single bogey and was the lowest round of the day. Sindlinger shot 217 (+1) for the tournament.

“This was a good year to go out and play this well,” Sindlinger said. “I tried to stay in the fairways as much as I could.”

Livermore’s Alexa Capesius, who finished runner-up (223) to Sindlinger, tried to stay within striking distance after an eagle on the 11th hole. Capesius would play her last seven holes one-over par to finish six back of the pace. Capesius will be a senior at the University of Missouri-St. Louis and was able to take away a lot of positives from the week.

“For me this week, keeping the driver in the fairway (was important),” Capesius said. “You did not want to be in the rough. It’s so thick and making hitting greens very difficult.”

Capesius, along with many of the players, commented on the tough, yet fair, challenge they found on the greens.

“The greens are very tough,” Capseius said. “You have to stay on the right side of the hole. I tried to make sure I was always two putting them. I tried to just do what I had done the past two days and if putts drop, great.”

Morgan Kukla, a teammate of Sindlinger at Iowa, finished in third place (227). Three early bogey in the final round ultimately did the Hawkeye golfer in and too far back to chase after her teammate, although she tried, closing with 76 (+4).