MASON CITY – An early morning traffic stop led to a trip to the jail for a Mason City man, now accused of drunk driving for the third time.

A Mason City police officer stopped a vehicle at the 300 block of 1st Street NE for expired registration Saturday morning, January 23 at about 2:01 AM. After an investigation, the officer found that the driver, 36-year-old Michael Patrick Melhus, was driving with a suspended license and no registration. The officer further determined that Melhus was intoxicated.

Melhus was arrested and charged with operating while intoxicated and driving without a valid license and registration. He was jailed and later released, pending a court date.

The Iowa State Patrol arrested Melhus back in June of 2014 for drunk driving, and he later pled guilty to first offense operating while intoxicated. He was ordered to pay $2,233.24 in fines and court fees, but records show he’s paid just $100.00.

Melhus was also arrested back in 2001 in Story county for drunk driving. He pled guilty. 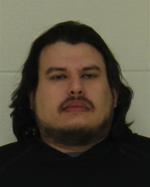