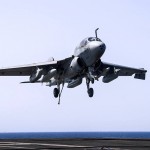 “Deliberate strikes in Mosul continue to degrade Daesh and set the conditions for future operations,” said Brig. Gen. Thomas Weidley, CJTF-OIR Chief of Staff. “The Coalition will continue to apply pressure on Daesh elements throughout all of Iraq as we make steady progress in degrading and dismantling Daesh’s military capabilities in support of the Government of Iraq.”

The strikes were conducted as part of Operation Inherent Resolve, the operation to eliminate the ISIL terrorist group and the threat they pose to Iraq, Syria, the region, and the wider international community. The destruction of ISIL targets in Syria and Iraq further limits the terrorist group’s ability to project terror and conduct operations. Coalition nations which have conducted airstrikes in Iraq include Australia, Belgium, Canada, Denmark, France, Jordan, Netherlands, United Kingdom and United States. Coalition nations which have conducted airstrikes in Syria include Bahrain, Canada, Jordan, Saudi Arabia, United Arab Emirates and U.S.