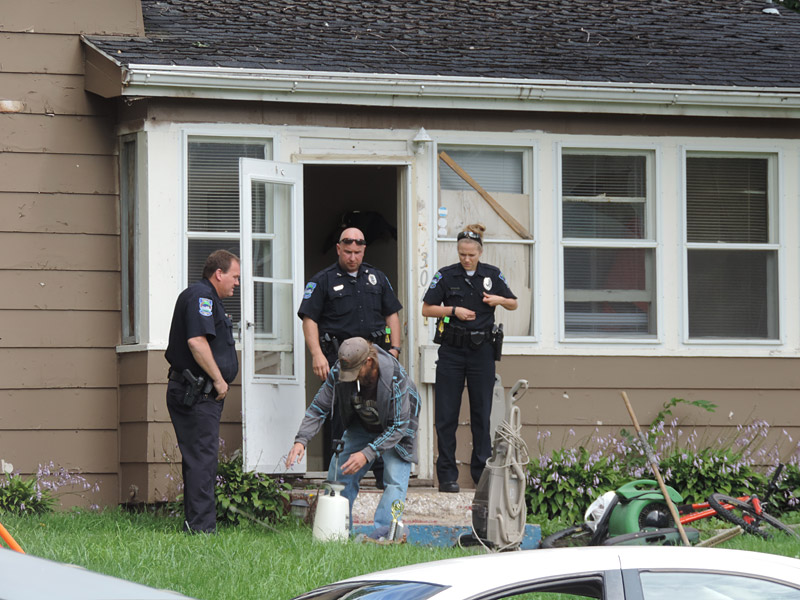 MASON CITY – Police were called to a Mason City rental house Thursday when a woman called 911 to say her kicked-out boyfriend had entered her house through a window.

The scene unfolded at 304 8th Street SE, a rental house owned by people from Rockwell. A woman who lives in the house had called emergency 911 just after noon to alert police that her ex-boyfriend had returned to her house and was inside, and that he had entered through a window, which had been covered in plastic.

At the residence, police stood in the long, unkempt grass in the front yard, next to two broken windows.  The house is covered in brown, chipped paint and surrounded by a cracked, short retaining wall.  A dingily-dressed man in a Harley shirt emerged from the front door of the house with a cigarette dangling from his mouth, carrying a child’s bike, a vacuum and other items.  He was shaking his head in disgust as police nonchalantly asked him questions.

On the west side of the house, a window was visible on the bottom floor, just a couple feet off the grass.  It was covered with torn plastic, and in the grass sat a window screen with a hole ripped in the lower left corner.

Police told NIT that the woman who called police had “kicked him out” a few days ago and that “it’s her house” but said no crime was committed.

The man continued to load stuff into his car as police stood by. 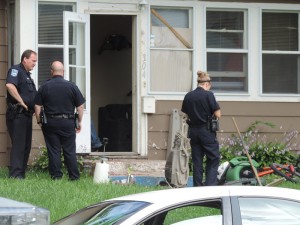