Hadacek was placed on probation after a voluntary negotiated guilty plea to one Class D felony charge of forgery and one Class D felony charge of 3rd degree burglary. The burglary charge stemmed from a report to the county sheriff of suspicious activity at rural residence. Brandon Hadacek, Bradley Hadacek, and Nathan Olsen were found by law enforcement in a vehicle that had fled the scene of the rural acreage and all three were charged for the burglary incident.

On Tuesday District Court Judge James M. Drew found Hadacek guilty of the probation violation and sentenced him to serve 180 days in county jail. Judge Drew continued the prior orders leaving Hadacek on probation with the Iowa Department of Corrections for three to five years in addition to his return to Beje Clark following the commencement of his jail sentence. Two five year suspended prison sentences handed down originally by District Court Judge Colleen D. Weiland in August 2011 remain suspended.

According to the Cerro Gordo County Jail Inmate Population Report Hadacek will be eligible to return to Beje Clark on July 29th at the completion of his sentence. 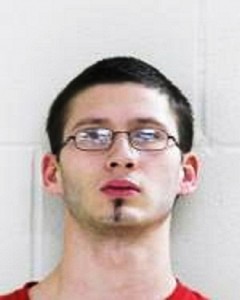