MASON CITY – Rock the Block Party at Madison Park on Saturday had a huge turnout of people involved and people having fun.

Dodgeball in the Megarena was something new and exciting as were the war games with electronic guns.

The Dunk tank had young man, Matthew, age 5, dunking his teenage sister, Lexi, age 14, on his first try, “I kind of encouraged them to do it,” giggled mom, Emily.

The balloon jousting fight between (Red)-Johnathon Finck, age 8 and (Green)-Rocky Williams, age 9, of Mason City, had the Red coming up a winner. This time anyways, Williams was already in line to give it another shot. “He really likes this game,” said his mom with a big smile.

A group of actors and actresses from the Stebens Children’s Theatre were in the park entertaining the people in their costumes. Elizabeth Ouverson, Elijah Warfield, Noah Johnson, Lydia Ouverson and Sarah Betz didn’t think twice about getting their pictures taken. It’s an acting thing.

“The Stebens Children Theatre will be showing for the 2013-2014 Season WSCT Radio Barn Dance, The Legend of Sleepy Hollow, A Christmas Carol, The Lion, The Witch and the Wardrobe, Aesop’s Fables, Honk!, Stepping Out at Stebens-2014 and Twelve Dancing Princesses,” informed Ouverson. 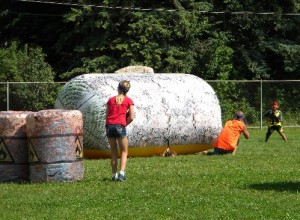