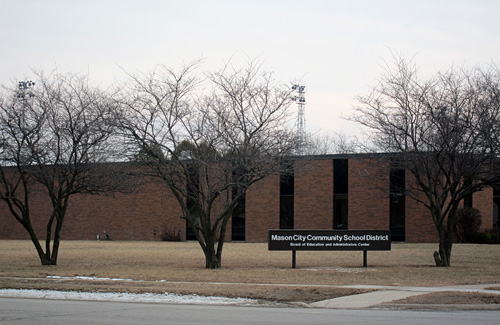 MASON CITY – Sources are indicating that the Mason City School District is investigating the possibility of a referendum for a voter approved Physical Plant and Equipment Levy (PPEL). A PPEL is used to fund repair, infrastructure, and specified equipment purchases.  According to County Auditor Ken Kline, “I would estimate the cost of a special election at $5,500.”

This levy is voted on by special election of the taxpayers and is set for 5 or 10 year periods. According to a presentation in 2012 to the school board, there are two rate options for this levy:
– $0.67 per thousand or $1.34 per thousand
– Combined Board/Voter maximum = $1.67 per thousand

The Mason City School Board will be meeting tonight (Monday) for a work session to discuss “future finance opportunities for schools.”

The school board also met last week as part of the Conference Board and approved a $1 million dollar project to re-appraise all commercial, industrial and residential property in Mason City.  According to City Assessor Dana Naumann, once the project is complete the three taxing entities involved (Council and Mayor; County Supervisors and the Mason City School Board) “should have more property value to levy against.”

NorthIowaToday.com has confirmed that the Mason City School District has been in contact with Ken Kline in the Auditor’s Office at the courthouse to determine the dates and costs of holding the referendum.

In a letter from Mr. Kline to Ramona Jeffrey of the Mason City School District sent just this morning, the district is informed:

I am writing in response to our phone conversation about the Mason City Community School District possibly calling an election on questions of imposing a physical plant and equipment levy and/or an instructional support levy.

To call for a special election, you must file written notice of the proposed date, along with the complete text of the public measure, at least 46 days before the election, and the respective deadlines for such filings are February 15th and May 10th. To put the question on the regular school election, you must file in this office the complete text of the public measure, along with all nomination papers of candidates for school board, on or before Friday, August 2nd.

I want to call to your attention that any vacancies in the position of school board director occurring 60 days or more before the date of a special election must be filled at that special election. This is true even if the vacancy was previously filled by appointment.

Our records show that Gary D. Hoffman was elected to a 4-year term in 2009. It is my recollection that he resigned following the September 2011 regular school election, and Robert Thoms was appointed to fill his position.

Presuming this is correct, that position – and any other similar vacancy – must be listed on the ballot at the special election as “director at-large, to fill vacancy”. You will find enclosed an Affidavit of Candidacy, Nomination Petition, and Candidate Guide. Please feel free to make or request additional copies of these forms.

With respect to the instructional support levy, the School Board can simply act to place the question before the voters for a term of ten years, or can adopt a resolution imposing the levy for five years without putting the issue to a vote. However, if the Board opts for the second path, members of the public can force the issue to a vote by submitting a petition to you that contains at least 594 signatures of eligible electors of the District. That petition must be filed within twenty-eight days of the Board action.

For the voter-approved PPEL, the Board can put the issue to a vote on its own motion, or must do so if a petition containing 594 signatures of eligible electors is filed with the Board.

For either type of public measure, a simple majority of those voting in the election is sufficient for approval by the voters.

I hope this information is helpful. Please contact me if you have questions or if we can be of further service.