Election Day: Time for voters to have their say 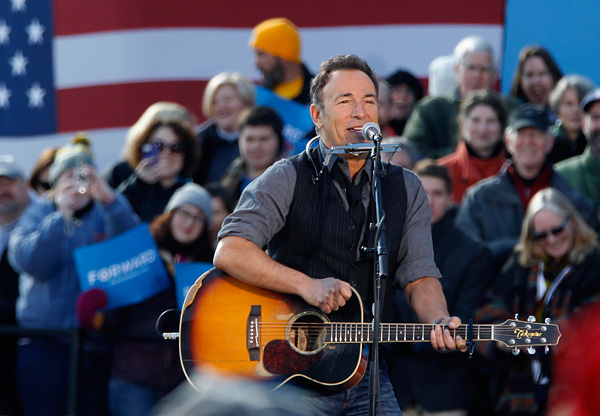 WASHINGTON — After billions of dollars, hours of debates and frantic last-minute pitches from the candidates, it’s up to the voters Tuesday to decide whether to give President Barack Obama a second term or change course with Republican Mitt Romney.

Also at stake is control of Congress. Thirty-three Senate seats and all 435 House of Representatives seats are up this year, and while the House is expected to remain in Republican hands, Senate control hinges on a host of tight races.

Turnout will be one key to handicapping who’s winning the White House and congressional battles, heading a long list of unknowns. Will the relentlessly negative campaign help or hurt? Did superstorm Sandy benefit the president? Did early voting give him a big advantage?

Once the polls close starting at 6 p.m. EST in Indiana and Kentucky, a number of early clues will signal whether Obama or Romney will get the 270 electoral votes needed to win. Polls on Monday continued to show the race a virtual tie nationally and in most of the 11 battleground states.

The first hints of how the night might go will come in four early poll-closing states: Virginia, North Carolina, New Hampshire and Indiana. Obama won all four in 2008.

Romney needs all four if he’s to become the sixth person in 100 years to defeat a sitting president. Should he falter in even one, or the results become too close to call, this race won’t be over quickly.

Obama, on the other hand, can score an important win early by taking Florida. Losing its 29 electoral votes would be a huge blow to Romney, who has pushed hard for the state’s votes and began his last full campaign day Monday in Orlando.

“Tomorrow we begin a better tomorrow,” Romney told about 1,000 supporters, stressing his closing argument that Obama bungled the economy and is too fierce a partisan to work with Republicans.

The president was in Madison, Wis., where he appeared with legendary rocker Bruce Springsteen.

“I stood with President Obama four years ago, and I’m proud to stand with him today,” Springsteen said. Obama hugged the singer and reminded the crowd, “We’ve got more change to make.”

Turnout was expected to be down somewhat from 2004 and 2008, according to models developed by the Gallup Organization. Voters “have not been quite as engaged” in the election, a Gallup analysis said, and many voters could be distracted by Sandy, whose impact is still being felt in parts of the Northeast.

As the night unfolds, here’s how to watch the returns:

Most states are solidly for Obama or Romney, so 11 are likely to decide the race. All have polling places scheduled to close by 10 p.m. EST. All went for Obama last time, and he has to hold on to most of them to win again.

7 p.m. EST: Virginia. Obama’s 2008 victory was the first there by a Democratic presidential candidate since 1964. Romney needs its 13 electoral votes.

7:30 p.m. EST: Ohio, North Carolina. Romney needs Ohio and its 18 electoral votes; no Republican has won the White House without the state. North Carolina is another state Obama won in 2008, the first time a Democrat had taken it in decades, but Romney is counting on winning its 15 electoral votes. If not, he’s probably in trouble.

8 p.m. EST: New Hampshire, Florida, Pennsylvania. If Obama wins Florida, Romney’s chances would get shakier. But if Romney wins Pennsylvania’s 20 electoral votes, which Obama has regarded for months as his, the president should start worrying. The four electoral votes of New Hampshire — Democratic in the last two elections — matter if the race stays close.

9 p.m. EST: Wisconsin, Colorado, Michigan. A Romney win in Michigan — a state Obama won last time by 16 percentage points — would be another sign that the president is faltering. Wisconsin and Colorado are tossups.

10 p.m. EST: Iowa, Nevada. Nevada has been trending Democratic. A strong Latino turnout would be a signal that Obama is doing well. Iowa is another tossup.